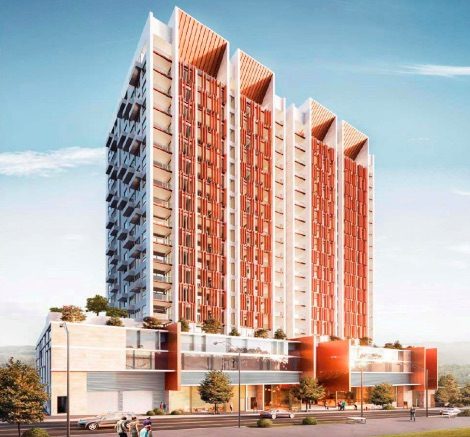 Artist’s impression of the Horizon development

A revised application will be considered by the Joint Regional Planning Panel (JRPP) for the $57.2m commercial and shop top housing development at 321 to 331 Mann St, Gosford.

Mann St Enterprises Pty Ltd is responsible for the development to be known as the Horizon building. “The subject DA has been amended to incorporate the land located at 331 Mann St, thereby mitigating the potential risk of an isolated lot being formed following the positive determination of DA49489/2016 for land at 333-337 Mann St,” a consultant’s letter to Central Coast Council explained.

“The individual land owners have agreed to the inclusion of 331 Mann St, recognising that a consolidated site would provide a greater opportunity to deliver a better built form outcome in Gosford City Centre.” JRPP panel members have had one briefing meeting to discuss the proposal, which includes demolition of the existing development on the site and the construction of a 24-storey mixed-use development. According to the record of that meeting, “the built form of the building will comprise a single tower over a podium base.

“Key features of the proposal include: four levels of car parking integrated into the fabric of the podium base, with one level partly underground; two levels of commercial tenancies; 20 levels of one, two and three-bedroom residential apartments (116 apartments in total); and landscaping of the building and its surrounds. “Internal legal advice is being sought regarding planning controls and bonus for additional sites added since lodgement. “Treatment of podium and parking is important with active uses preferred, including an above ground level to a depth that may be useable, for example six metres. “Landscaping to the rear and side is also important.”

According to the record of the JRPP meeting, the application was to be renotified. Central Coast Council’s DA tracker confirms that re-notification occurred in June and July, but it appears that no submissions were received. The application has since been referred to Sydney Trains, NSW Police, NSW RMS and several internal Central Coast Council departments. The JRPP has not yet set a meeting to determine this DA, but Council and the applicant appear to be at odds over whether bonus height provisions should be applied to 331 Mann St, the additional site.

The maximum building height allowed on the site under existing planning controls is 60 metres, but consultants for the applicant have argued that bonus height provisions are applicable, extending the height limit to 78 metres. Likewise, the developer is claiming bonus fl oor space. The subject site sits in the northern part of the Gosford City Centre, in a prominent location along Mann St, the Centre’s main north-south ‘spine’. The majority of the land in this area is zoned B4 Mixed Use. According to a revised Statement of Environmental Effect (SEE): “The proposed podium has the following key features: large fl oorplate with nil setback to Mann St; and nil setbacks to the northern and southern boundaries maintain a block-edge façade to the main commercial Mann St frontage.”

According to the SEE, the podium height would range from 11.5m to approximately 15.5m above street level, as it follows the slope down Mann St. “A range of commercial spaces varying in size, height, elevation and orientation will be created around a mixture of car parking, services and circulation.” The podium will include “extensive façade articulation and treatment on all sides, including awnings, splayed entry canopy, glass or precast curtain walls, sandstone cladding, patterned pre-cast concrete, louvres and vertical frosted glass fins.” The building will have a “combined arcade style entrance off the Mann St frontage, activation of the rear of the site through commercial uses fronting onto landscaped areas, and an internal loading dock and waste collection area.

The proposed tower will have a maximum height of 57.2m above podium roof level with a total maximum height above street level of approximately 70m. There will be provision of a communal open space area at the base of the tower (Level 4), including a swimming pool, landscaping, seating and barbeque facilities. The revised SEE also explains how the development demonstrates design excellence. “A high standard of architectural design has been achieved, particularly through the unique building façade treatments, stepped built form, and variation in materials. “Activation of the street at the pedestrian level would be achieved through the use of awnings for weather protection, ground level commercial and residential lobbies, and ground level commercial (café) space.

“The proposal minimises overshadowing impacts and impacts on view corridors for surrounding development, and incorporates high quality materials and finishes.” Another example of design excellence was “public domain improvements such as upgraded pedestrian paths and the planting of five street trees.”