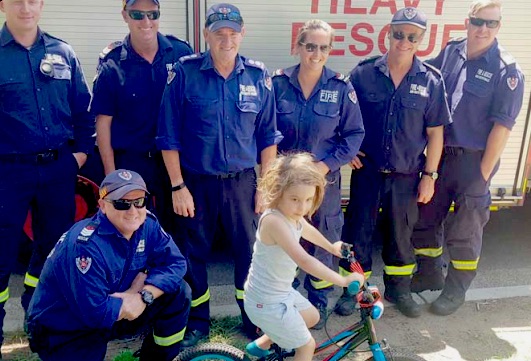 Fire and Rescue NSW (FRNSW) Kincumber and Gosford crews came to the aid of a young boy.

Kincumber Fire and Rescue responded to a call for assistance when they received reports that a child was trapped in a bicycle at Broadwater Park, Kincumber, on November 3.

When they arrived, they found a young boy with his leg wedged between the bike frame and its pedal arm. “Our budding young cyclist was full of smiles when the pump arrived, where he explained that he was all good, but just stuck,” a spokesperson for FR NSW Kincumber said. “The crew set about releasing our young friend’s leg with some careful manipulation, and soon had him free.

“It was at this stage that our friends from Gosford 304 Fire and Rescue arrived at the scene. “Gosford 304 is a specialist rescue station and were nearby, so stopped by to offer any assistance. “Our patient was now beaming and thought it was awesome that all these trucks were there just for him,” the spokesperson said.

From bush fire alert to flooding