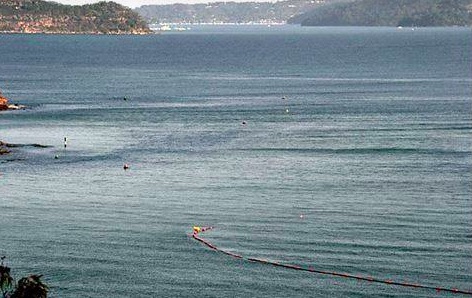 The dredge line in the Ettalong channel.

“The association has been maintaining a close watch on the dredging program and its impact on resumption of ferry services to Ettalong and Wagstaffe,” Mr Allsop said. “Needless to say, we have all been very frustrated, not only by the loss of ferry service but also by the slow progress we are seeing on the dredging itself and the string of false hopes as to when services may resume. “The current dredging program is a program of emergency works funded by the State Government with the sole objective of providing a safe channel for the ferry to operate.

“We are advised that the ferry company and the Department of Lands, as the commissioning department, are in close consultation, and that the dredge is currently undertaking some final trimming of the channel to provide the margins of safety required by the ferry. “Several ferry test runs to Ettalong Wharf have already been made as part of a survey of works completed to date,” Mr Allsop said. “Why this final trimming has been on hold for weeks on end is anyone’s guess, but the dredge has been active this week. “We would anticipate the ferry should be able to perform further tests in the next week or so. “If successful, service may resume in early November.

“Nobody is providing any promises, but at least the signs are positive,” he said. “In an effort to see that this work is not in vain, the Peninsula Waterways Committee has been established to represent the interests of the community on both sides of Brisbane Water to ensure a sustainable long term program of works and maintenance is put in place by Central Coast Council and the NSW Government. “The committee is chaired by myself and has representatives from Ettalong and Umina, as well as, administrative support from Ettalong Diggers,” Mr Allsop said.

The committee will be meeting with councillors, state politicians and various other stakeholders to keep the pressure on for appropriate action in the short and long term. “We will keep the community informed, filling a void left between Council and government in the current program,” Mr Allsop said.