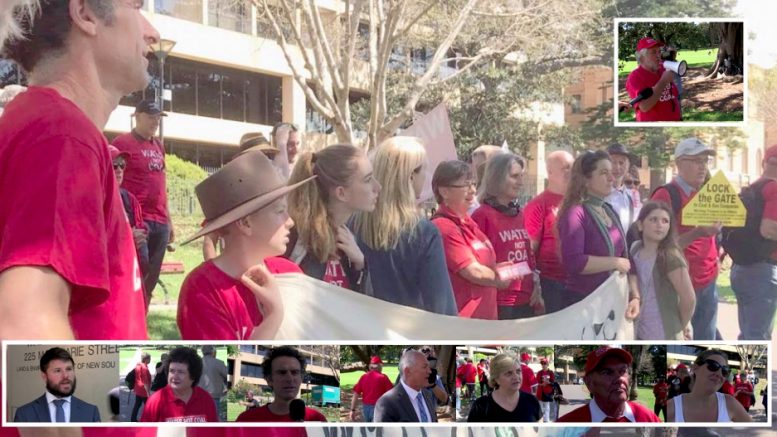 Around 70 residents from across the Central Coast travelled to Sydney on Monday, November 12, to participate in a Water not Coal rally in the Domain, against the approval of the Wallarah II coal mine.

The rally was held to mark the commencement of action in the Land and Environment Court, brought by the Australian Coal Alliance (ACA) community group, against the NSW Minister for Planning, Anthony Roberts, and Wyong Coal Pty Ltd.

“For a Monday morning and for people having to travel down from the Central Coast, it was very well attended,’ said Alan Hayes, ACA’s founder and spokesperson.

“It was exceptionally pleasing to see so many Central Coast people who care about their water catchment turning up to demonstrate that concern,’ Hayes said.

Shadow Minister for the Central Coast, David Harris, attended the demonstration, and again, reinforced his long-term opposition to the Wallarah II mine and his views about the importance of stopping the long-wall coal mine from going ahead in the Central Coast’s water catchment area.

Nick Clyde from the Lock the Gate campaign also spoke about the importance of protecting the Dooralong and Yarramalong valleys. Former Wyong Mayor and MP, Bob Graham, also attended and spoke about how important it was to protect the water supply. “The irony was that we had won this fight two times before,” Alan Hayes told the crowd.

Darkinjung LALC ensured the mine was not approved in 2013-14, when they denied access to their land. In 2011, David Harris had heavily lobbied the then Keneally Labor NSW Government resulting in Labor’s Planning Minister, Tony Kelly, rejecting the DA on the grounds that it was not in the public interest.

“The Liberal party in opposition, agreed that there should not be any coal mining,” Hayes said. “Barry O’Farrell said the next Coalition Government would not allow coal mining, not only in the valleys, but in any catchment, ‘no ifs, no buts a guarantee’,” he said. “This government does not deserve to be in office because as soon as they won the election, they reneged.

“We are going to be running a very strong campaign throughout the Central Coast, and also Sydney, to oust [Member for Terrigal] Adam Crouch and other Liberals to ensure that this Liberal Government is brought to their knees and is not reelected.” Hayes said ACA would mount the campaign in the lead up to the March, 2019, state election, because the Land and Environment Court probably would not give its ruling before March. “The Liberals committed the ultimate act of bastardry against the Central Coast people in February, when they approved the mine,” he said.

The ACA is being represented in its LEC action by the Environmental Defenders Office with some financial assistance from Central Coast Council. “We have 10 solid grounds against the approval of the mine in February, which was unlawful because it failed to consider certain aspects of the mining SEPP (State Environmental Planning Policy) and other criteria. “We have commenced this action because we do believe the approval was invalid, and we are doing it because it is in the public interest to do so.” When asked why challenging the NSW Government was left to a small community group instead of being mounted by Central Coast Council, in its capacity as the region’s water authority, Hayes said: “Well that is a good question.

“Probably because that small group of people believe it is important to leave, for generations to come, what we have enjoyed, and that is a reliable water source on the Central Coast. “The NSW Government doesn’t care less. “It is wanting to put 45,000 more homes in the northern part of the Coast over next 20 years and to do that they need water, but they tend to pander to their developer mates and forget about the needs of their community.

“The greatest asset we have on the CC is our water supply, and sometimes in life, you have just got to stand up and be counted.

“The age that we all are now, it would not impact on us, but it will impact on our children and their children. The LEC action commenced after the rally in front of a packed court room. “There was not enough space inside, people had to stand at the door or sit outside,” Hayes said. “All you could see in the court room was red t-shirts with ‘Water not Coal. “It just shows you how much people do care,” he said. The case is expected to continue for four days.