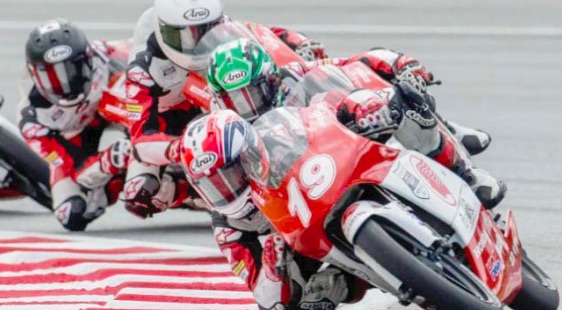 The Cup is a highly contested event, where young international racing talent, the champions of tomorrow, are given the opportunity to show their skill by riding on equal bikes. There were 24 riders contesting 12 races during the year, which is run in conjunction with the Moto GP calendar. No other Australian had won a race in this competition, but not only did Van Eerde win races, at just 16, he was crowned the 2018 Asian Talent Cup Champion in his first year of international competition.

According to CCJMCC Publicity Officer, Col Adams, Van Eedre is a regular competitor at the Club’s track at Allen Park, Somersby, and was twice the winner of the annual Junior Central Coast Cup. “Billy and his father Brian moved to Europe in February this year, so that Billy could test his ability against the world’s best young riders in the Red Bull Rookie Series, which are the European circuits, then to Asia to compete in the Asia Talent Cup,” Adams said. Van Eerde will be returning to Europe in March, 2019, where he will again ride in the Red Bull Rookie Series.

He has received valuable support and guidance this year from fellow countryman, Jack Miller, who is currently in the World Moto GP series. Van Eerde’s ambition is to compete in the Moto 3 World Series.