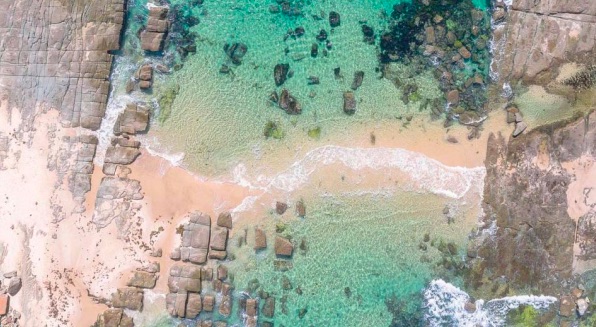 Soldiers Beach was one graded as one of the best on the Coast in this year’s State of the Beaches Report Photo: Central Coast Drones

Beaches in the former Wyong Shire have been named some of the best to swim at in the entire Central Coast, according to the Office of Environment and Heritage (OEH) 2017-18 Central Coast State of the Beaches Report.

The Report is the culmination of data collated by Central Coast Council and its predecessors under the OEH’s Beachwatch Partnership Program, and summarises the performances of 32 monitored swimming sites across the Central Coast, through a grading and stability system. In 2017–2018, 53 per cent of swimming sites in the Central Coast region were graded as Good or Very Good. “These sites were suitable for swimming for most or almost all of the time. “While this is a decline in overall performance from the previous year, it largely reflects recent changes in the monitoring program to include only patrolled beaches and designated swimming sites, rather than a decline in water quality. “Central Coast Council has a large proportion of lake/lagoon and estuarine swimming locations in its program which have been most susceptible to impacts from wet weather conditions,” the Report states.

Lakes, Soldiers and North Entrance Beaches all recorded the highest grade possible of Very Good, giving the former Wyong Shire the highest number of top performing sites on the Coast.

According to the Report’s grading system, sites graded Very Good were found to have generally excellent microbial water quality and very few potential sources of faecal pollution. Water at these sites is considered suitable for swimming almost all of the time. The Entrance Beach, The Entrance Ocean Baths, Toowoon Bay, Shelly Beach and Summerland Point Baths all recorded a grading of Good. Sites graded as Good had generally good microbial water quality and are considered suitable for swimming most of the time, however swimming should be avoided at these sites during and up to one full day after heavy rainfall. It wasn’t all positive results though, with Cabbage Tree Bay Rockpool, Gwandalan Lake, Chain Valley Bay, Canton Beach, Mannering Park Baths and Lake Munmorah Baths all recording a grading of Poor. Sites graded as Poor were generally susceptible to faecal pollution and microbial water quality at these sites is not always suitable for swimming. Swimming at these sites is not advised after dry weather conditions and after heavy rainfall for up to four days.

All sites in the former Wyong Shire received a stability rating of stable, except Shelly Beach, which was found to be in decline in comparison to its rating from previous reports. The Chronicle also noted that Cabbage Tree Bay Rockpool, The Entrance Ocean Baths, Summerland Point Baths and Mannering Park Baths all recorded a provisional stability rating as all three of these sites are being newly monitored as of 2017. The Report indicated that the Shire’s top performing site was North Entrance Beach, which recorded a 99 per cent rating from the 100 water samples used to collate the Report. Lakes and Soldiers Beaches were just behind at 97 per cent and 96 per cent respectively. Of the sites graded poor that have comparable data from previous reports, Canton Beach was found to be the worst performer, with a 71 per cent rating from the 100 samples taken.

The Chronicle notes that provisional sites did achieve a lower rating in some instances, but acknowledges that provisional sites have less recorded data so their results are less indicative of their overall suitability for swimming than other sites that have been monitored from as early as 2002. Following the publishing of the Report, Central Coast Council issued the following media statement. “The OEH has released the Central Coast State of the Beaches 2017-2018 report and has identifi ed that 94 percent of Central Coast Ocean Beach sites are rated Good to Very Good and rarely exhibit signs of bacterial contamination. “In the Report, the OEH acknowledges that there are limitations in the grading system used, such as beaches only able to be rated as Good or Poor with no option for Fair,” the statement reads. Council also commented that some sites were more easily effected by contamination from stormwater, animals and weather conditions, and also stated that some sites’ water quality, such as Gwandalan Lake, were effected by natural conditions such as having slow fl owing water and did not have the benefit of natural tidal flushing like Ocean Beach sites.

“To address Poor ratings, Council’s Waterways and Coast Protection Unit is assessing baseline data and investigating the potential to undertake further sampling to understand the source of faecal contamination, for example whether it is from human, other mammal or bird sources. “It is important to note that it can take several years for ratings to lift to Good or Very Good, as this is determined using data that could be up to four years old. “The Report is based on the last one hundred samples collected for each location, which means results can relate to data recorded as far back as 2015. “For beaches that experience water quality reduction after signifi cant rain events, Council has installed permanent signs advising that swimming is not recommended following rain events,” the statement reads.