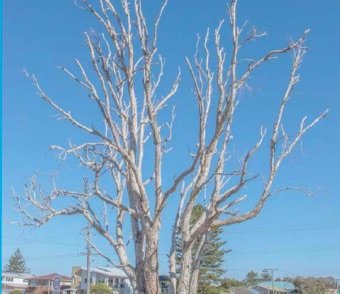 A dead tree in Mazlin Reserve. Poisoned by persons unknown.

Over 170 trees have been poisoned in Mazlin Reserve and at Cabbage Tree Bay, Norah Head, since 2012, according to Toukley resident, Mark Smith.

Smith and friend Tony Booth have been documenting the deaths using drone footage and still photography.

Smith said they have evidence of holes drilled in trees and filled with poison. They’ve watched as 10 major pine trees at Cabbage Tree Bay have died from being poisoned over the same time period. “I have drone footage of the big pines in good condition three years ago, and they are 80 to 100 years old,” Smith said. “There are 170 trees in Mazlin Reserve that we have documented as having been poisoned. “One of the pine trees was on a lady’s private property. “She put a fence around it and it was still poisoned. “It has been extremely difficult to catch them in the act. “They work under the cover of night, drill the holes, pour the poison in and the trees just slowly die.

“If this happened anywhere else in Australia, there would be an uproar. “Council is very slow to act,” he said. The issue was a discussed at the latest Norah Head Ratepayers and Coastcare Association meeting, held on Monday, October 1. “The association has been documenting this for quite a while as well, and a couple of the residents who were at the meeting last night stated that they had been in touch with Council about the tree poisoning and how bad the condition of the park was,” Smith said. According to the residents, Council said they would not be addressing the condition of the reserve until the poisoning stopped. “It just looks like a dead zone, there are no animals there anymore, no birdlife and no shade,” Smith said.

“My children used to sit under the big Melaleucas that were 20-40 foot high. “Now if there is a tree 20-30 foot high, it is targeted. “I am looking for solutions, not buck passing. “There is going to be a master plan for Norah Head, the money has been approved, but residents want to know how and when Council will address this problem.” Replanting is one obvious solution to restoring the shade and habitat in the reserve.

“I think they just keep poisoning what gets replanted,” Smith said.

“What I am extremely upset about is that Coastcare got the local school children involved and they did a replanting in the north-western corner of the park, and those trees have just been poisoned.” Councils in Sydney have combatted mass poisonings by placing shipping containers in front of houses suspected of tree poisoning to improve their ocean views, Smith said.

This was also done by Gosford Council on The Esplanade at Ettalong. “The containers block the view, trees are replanted, and the containers are not taken away until the trees are established. “The interesting thing is the houses in Soldiers Point Dve never had a view. “You could never see the ocean from the park, you could see maybe little pieces here and there but you could not stand on the hockey oval and look at the ocean.

“When all the double storey houses were built on Soldiers Point Dve, that is when the tree poisoning started.” Replanting and preservation is the medium-to-long-term solution to the problem, but concerns have recently been raised about soil contamination due to all the poisoning that has occurred in the area. “Council would have to remove the soil, that is why it is a dead zone. “The other thing is, if there are new saplings that are growing, someone is walking through the bush and snapping them off, and they are the rare Coastal Banksias,” he said.