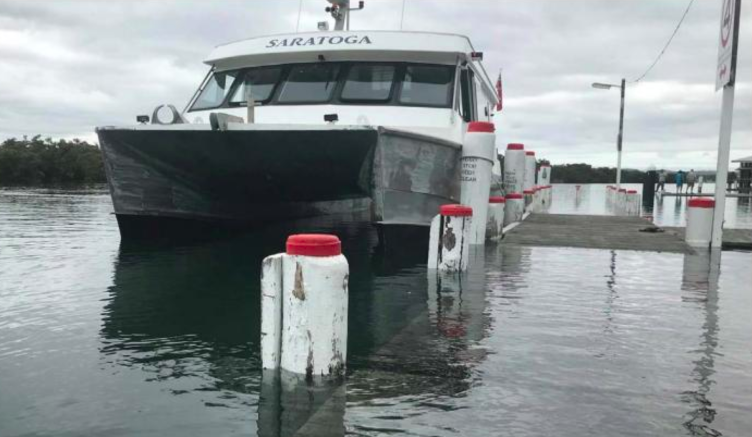 Speaking in Parliament on September 21, she said: “In the Gosford electorate we have the wonderful Woy Woy Peninsula that is surrounded on all four sides by water. “Situated at the mouth of the mighty Hawkesbury River, the Brisbane Water has been the lifeblood of the community long before white fellas arrived on the Darkinjung and Guringai land. “Our waterways were the original commute, on boats made by outstanding shipwrights. “Being surrounded by water, we are lucky to have several public wharves available for recreation and commercial use.

“Just recently we opened a new floating pontoon at Koolewong Wharf and we are now campaigning to have a hoist attached to the wharf so that people with disabilities can get on and off boats on the pontoon with ease, so that we to can go fishing, sailing and boating. “The completion of the upgrade coincided with a great inclusive tourism meeting held at Ettalong Diggers,” Ms Tesch said. “People with disabilities, their families and carers, united with people from the disability sector to discuss how we can improve access for all in tourism on the Central Coast.

“On that note, people with disabilities are thrilled with the new floating pontoon at Ettalong allowing much easier access to the ferry as the tide rises and falls. “We finally have a great upgrade to the Ettalong Wharf, connecting us to the Northern Beaches, workers to jobs in the city and students to schools on both sides of the Hawkesbury and giving tourists’ easy access to Ettalong, Hardys Bay and the wider Peninsula. “It’s such a pity that for the past six months our ferries have been unable to run due to the dredging situation in Ettalong Channel. “The community has watched with baited breath as we waited for the dredge to arrive for it to sit idle for days on end whilst the Member for Terrigal assures the community that dredging’s taking place.

“The community has, time and time again, expressed their frustrations at the lack of long term solutions and lack of communication from the Berejiklian Government about the dredging. “Even the Federal Member for Robertson has finally realised the people of her electorate are suffering and has called on the state to hurry up and fi x the problem. “The government needs to understand that our water commuters, our tourism industry and our local businesses, rely really heavily on our waterways and on the associated infrastructure.

“Even the Spencer Wharf is on its way after the Spencer community ran their own campaign and won’t they be thrilled to have that delivered in their picturesque riverside community. “Unfortunately these great upgrades are in stark contrast to the state of our Woy Woy Wharf,” Ms Tesch said. “The ageing Woy Woy Wharf is one of the first things people see as they enter Woy Woy and it is clear the wharf is well overdue for an upgrade. “During the January King Tides, I was with the wonderful folk from Central Coast Ferries on the Woy Woy Wharf as palings floated up and the wharf was submerged. “Even my sporty wheel chair didn’t make the grade up the mobile ramp onto the ferry. “Ferry operators and customers are frustrated whenever we experience these regular tidal changes.

“Woy Woy Wharf is major commuter hub that renders ferries completely inaccessible to people with mobility issues, disabilities or prams. “Even the general public get their ankles wet as parts of the old wharf are completely submerged. “Despite how important this wharf is to the local community, the Liberal Government has been knocking back grant applications since 2012. “Gosford Council has previously undertaken studies to see how we can improve Woy Woy Wharf. “We’ve done the studies and the community is tired of waiting for the project to be funded.

“Woy Woy desperately needs a modern, floating pontoon wharf that can rise and fall with the tide, which is why I’ve started a community campaign calling on the government to work with Central Coast Council on a joint funding solution to provide a wharf that our community can be proud of,” Ms Tesch said. Ms Tesch’s community campaign has taken the form of a petition for which she is calling on the residents of Woy Woy to sign. Ms Tesch has already delivered one lot of signed petitions to Parliament House and is urging the community to keep the pressure up.