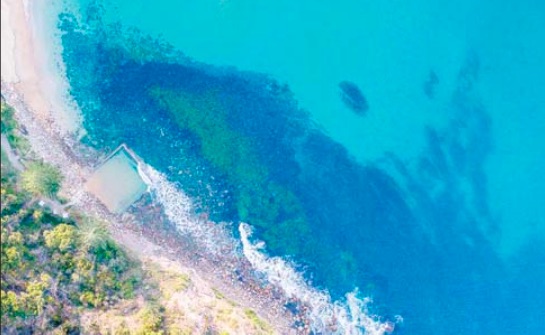 The Office of Environment and Heritage (OEH) has published their 2017-18 Central Coast State of the Beaches Report, including Terrigal, Wamberal, Avoca & MacMasters among 32 local swimming spots.

“These sites were suitable for swimming for most or almost all of the time. “While this is a decline in overall performance from the previous year, it largely reflects recent changes in the monitoring program to include only patrolled beaches and designated swimming sites, rather than a decline in water quality,” the Report states.

Wamberal, North Avoca and Copacabana Beaches all recorded a grading of Good.

Terrigal, Avoca and Cockrone Lagoons, along with Terrigal Beach and Davistown Ocean Baths, all recorded a grading of Poor.

According to the Report’s grading system, sites graded Very Good were found to have generally excellent microbial water quality and very few potential sources of faecal pollution. Water at these sites is considered suitable for swimming almost all of the time.

Sites graded as Good had generally good microbial water quality and are considered suitable for swimming most of the time, however swimming should be avoided at these sites during and up to one full day after heavy rainfall.

Of the sites graded Good all three were classified as Ocean Beaches with good self-dilution and natural flushing. All three sites graded Good and also recorded a beach status of stable in comparison to their performance in previous reports. The four lagoons are classified as Lagoon sites and recorded their grading of Poor due to their naturally low self-dilution and flushing. Lagoon classified sites are also considered much more susceptible to faecal contamination during dry weather conditions and especially after heavy rain.

All four Lagoon sites recorded a stable status. Terrigal Beach was graded as Poor due to its susceptibility to faecal contamination from several sources including stormwater and discharge from Terrigal Lagoon.

It is listed as an Ocean Beach site and recorded a status of stable. Davistown Baths is considered an Estuarine site and suffers from the same problems as the region’s lagoons, poor self-dilution and a lack of natural flushing. The Report indicated the site was susceptible to faecal contamination and other pollution after heavy rainfall and from the Brisbane Water. It recorded a status of stable . According to the Report, MacMasters Beach might be the former Gosford LGA’s best Ocean Beach site. The Report indicated that aside from very heavy rainfall events, MacMasters Beach was only impacted by pollution through occasional discharge from Cockrone Lagoon.

Central Coast Council issued the following statement regarding the Report. “In the Report, the OEH acknowledges that there are limitations in the grading system used, such as beaches only able to be rated as Good or Poor with no option for Fair.

“Terrigal Beach was the only beach to receive a Poor but has shown significant improvement and is on the threshold between Good and Poor. “In 87 per cent of samples taken at Terrigal Beach, it was rated as suitable for swimming, up from 85 per cent last year. ““Lakes, lagoons and estuaries often have slow flowing water and do not benefit from the flushing of natural tides. “This increases the time needed to disperse and dilute pollution, taking longer to recover from stormwater events.

“To address Poor ratings, Council’s Waterways and Coast Protection Unit is: Conducting a catchment audit for Terrigal Beach; assessing baseline data; and investigating the potential to undertake further sampling to understand the source of faecal contamination, for example whether it is from human, other mammal or bird sources. “It is important to note that it can take several years for ratings to lift to Good or Very Good rating, as this is determined using data that could be up to four years old.

“The Report is based on the last one hundred samples collected for each location, which means results can relate to data recorded as far back as 2015. “For beaches that experience water quality reduction after signifi cant rain events, Council has installed permanent signs advising that swimming is not recommended following rain events,” the statement reads.