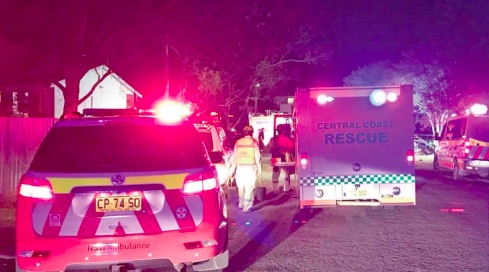 Central Coast Rescue Squad on the scene at Tuggerawong

The CCRS was first called to a property at Tuggerah, around 4:30pm, to reports of a cow that had become trapped in thick, deep mud.

The animal had been stuck for approximately a day before being found by passers-by. Crews were able to safely winch the 12-year old bovine out of the mud and it was left in the hands of a vet and the owner. While volunteers were packing up from the job, they were tasked to a serious motor vehicle accident at Tuggerawong. CCRS quickly arrived on scene to fi nd a single vehicle accident leaving two persons trapped in the vehicle. The driver was trapped for over an hour while CCRS crews worked with NSW Ambulance and Fire and Rescue NSW to cut the driver free. Both occupants were then released from the wreckage and fl own to hospital by Toll Ambulance Rescue and CareFlight. Rescue crews were on scene until midnight, assisting police with investigations.