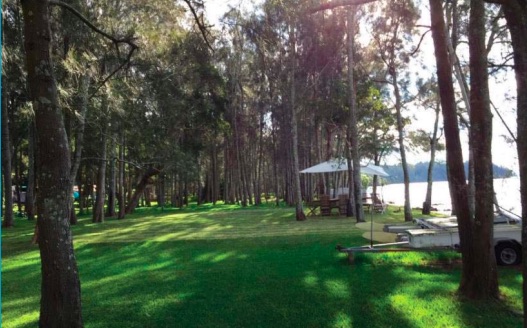 Part of the foreshore route preferred by the community.

Councillor, Jillian Hogan continued her campaign to have the ‘Forgotten North’ become the ‘Remembered North’ with the success of her motion to have the Mannering ParkChain Valley Bay shared pathway initial investigation and design options funded in Council’s 2019-2020 budget.

Bob Brooks from the Chain Valley Bay Progress Association, and, Andrew Whitbourne, from Mannering Park Precinct and Tidy Towns, both spoke in favour of the motion. Brooks said he believed the pathway would herald opportunities for disabled tourism and for extensive use “by all sorts of people for walking and cycling.” Whitbourne said the old Wyong Council had fi rst put forward the idea of the shared pathway along the waterfront between Mannering Park and Chain Valley Bay in 2003. A route was surveyed but not advanced due to costs and security concerns, he said.

“As a community, we have been lobbying since 2009 for Council to recommit,” he said.

At one stage, according to Whitbourne, the owner of Vales Point Power Station, had opposed the waterfront route. An area had been rezoned to SP2, then overturned by the State Government, in response to community. “We conducted a simple survey, and over 1,000 people signed supporting the foreshore, as opposed to Rutleys Rd,” he said. The vote was overwhelmingly in favour of the foreshore route. “The section of Rutleys Rd proposed by Council has had seven fatalities on a 1.4km stretch.

“The foreshore link has been supported by federal and state MPs, local councillors, high schools and, overwhelmingly, by the community,” he said. “Rutleys Rd is now on the bike plan and the foreshore has been dismissed, with a route score of 0, and it is diffi cult to understand how overwhelming support could result in a score of 0.”

He said the foreshore route provided connection to activity centres, schools, between centres, tourism, but was not even on Council’s 10-year plan. Clr Hogan thanked Whitbourne, Brooks and members of the gallery “who made the trip from the remembered north. “In Council’s access and bike plan, page 36, Rutleys Rd is noted as a priority, and the foreshore pathway is not noted as important in either plan,” she said. “The bike plan actually says it has to be separated from road traffic, it has to be safe, it has to not be near road traffic. “They are key words, and Rutleys Rd does not fi t the criteria. “There have been eight deaths with the latest accident just last Saturday night.

“How may stretches of road do you know that have been the sites of eight deaths that were not a highway?” She said the shared pathway from Mannering Park to Chain Valley Bay would be an excellent example of community building. “The foreshore pathway will also link to disability family activities, so staff need to require further consultation to establish the safest and preferred pathway route.” Clr Hogan’s motion was adopted without opposition.