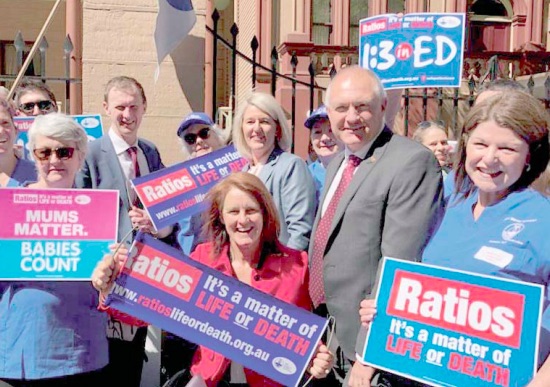 Member for Gosford, Liesl Tesch, has thrown her support behind the NSW Nurses and Midwives’ Association’s (NSWNMA) campaign to secure better patient to nurse ratios in public hospitals.

The NSWNMA has been campaigning throughout 2018 to have the NSW Government implement ratios to improve patient care and to take the strain off overworked and under-resourced nurses. General Secretary of the NSWNMA, Brett Holmes, said that nurses could no longer meet the demands of their workplaces, and that some hospitals were stretched to breaking point, trying to juggle employee wellbeing with the needs of their patients.

“In Emergency Departments and Paediatric wards, staffing levels are critical, lives depend on it, yet there are no mandated ratios in these areas,” Holmes said. “A new ratios system will mean that guaranteed nurse-to-patient ratios in every ward, on every shift, across all major and district NSW hospitals. “This will give a clear understanding of how many patients nurses have to care for, and provide patients with the level of care they deserve,” Holmes said.

He said that it was important to let the public know that less nursing-hours-per-patient are provided to those living in regional areas under the current staffing system. “The Public Health System Nurses’ and Midwives’ (State) Award allocates five or five and a half nursing hours per patient to country hospitals, depending on their size, whereas bigger city hospitals get six hours. “A patient’s postcode should not define their level of care. “Ratios will mean that a patient recovering from a hip operation in a country hospital will receive the same amount of nursing care as a patient who has had the same operation in a big city hospital.

“Shift-by-shift ratios should be implemented across the state and extended to country hospitals in order to bring country staffing levels up to the city’s.” The NSWNMA is asking for: 1 nurse to 3 patients in emergency departments and paediatric wards; in critical care units, either 1 to 1 care or 1 nurse to 2 patients; a minimum of 1 to 4 in city and country hospital general medical/surgical wards; for babies to be counted in the ratios on maternity wards; and for an improvement of ratios in mental health and rehabilitation units.

“As someone who has directly benefitted from our great public health system, and who has a sister who is a nurse who trained at Gosford Hospital, I’m fully supporting nurse-to-patient ratios. “Our nurses and midwives must know, when they go onto their shift, that they can provide safe patient care,” Tesch said.