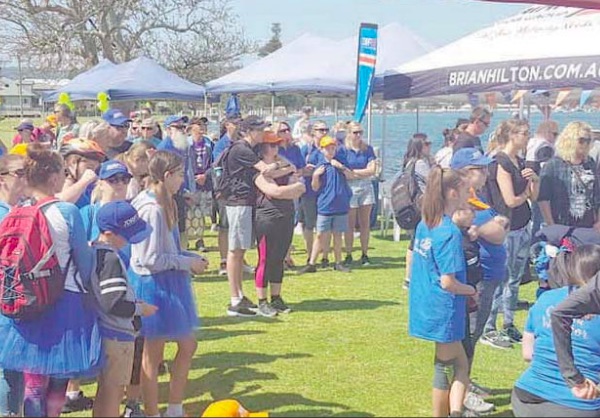 Fundraising for the 2018 Central Coast Juvenile Diabetes Research Foundation (JDRF) Walk is ongoing, and the event founder and organiser, Margaret Sheridan, hopes that the 2018 campaign will be the most successful one yet.

JDRF Walks happen annually across the globe to raise vital funding for Type 1 Diabetes (T1D) research in pursuit of the JDRF’s ultimate goal, finding a cure for T1D. So far, the 2018 Central Coast JDRF Walk, which was held on September 23, has raised just over $30,000 and Margaret hopes to see that figure grow to $35,000 by the end of the year.

It would be a milestone fi gure for the Central Coast JDRF Walk, and for Margaret, who is stepping down as coordinator after six years of delivering the walk on behalf of the region’s T1D community. Margaret herself is a T1D sufferer and said she decided to bring the JDRF Walk to the Central Coast after friends and family encouraged her to pursue the idea. “I had been participating in the Newcastle JDRF Walk for years, and as much as I enjoyed it, travelling to and from Newcastle, plus actually doing the Walk, was starting to take a toll,” Margaret said.

“I had always thought the Coast should have its own event anyway, and after discussing it with some friends, I thought why not give it a go,” she continued. This was in 2012, and after a whirlwind couple of weeks of preparation, the Central Coast Inaugural JDRF Walk was held in Davistown. The event raised $32,000, and subsequent events have always landed just shy of this fi gure, so Margaret hopes her swan song walk will buck that trend and deliver a new fundraising best for the region. “As someone living with T1D I can’t stress how important the JDRF Walks and the funding they raise are to T1D sufferers and their families,” Margaret said.

“The Walks are so important because they allow T1D communities an opportunity to connect with the wider community but also serve to educate people about T1D, which in turn helps promote a better understanding of diabetes as a whole,” Margaret said. “We have a 3000 plus strong T1D community on the Coast, many of which are children, and the Walk is a way to better educate people about the disease. “It’s really common for T1D to be misrepresented as Type 2 Diabetes or similar to it and it simply isn’t.

“T1D is an awful disease to live with and I feel terrible knowing that children have to go through the things I do just to go about their daily lives,” Margaret said. Margaret said the other reason she enjoyed bringing the JDRF Walk to life in Davistown each year was that it was simply a good old fashioned fun day out for the family. Around 400 people descended on the Davistown Waterfront and braved a cool, windy day to take part in the 2018 Walk, and Margaret wanted to take the time to thank the Central Coast community for their support over the years.