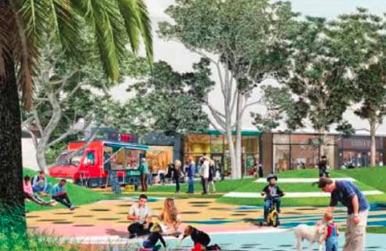 An artist’s impression of the city park

The Central Coast Regional Development Corporation (CCRDC) has sought the community’s ideas for the new Gosford Regional Park and Playground, with a four-week engagement campaign launched elsewhere on September 5.

The campaign aimed to seek ideas around how people want to engage in the Leagues Club Field space, what features they would like to see and where the playground should be positioned. CCRDC Chief Executive, Michael Cassel, said the chance to have your say was an invitation to be instrumental in the future of the city. “We know that people in Gosford and the Central Coast are keen to see change happen, and we see this engagement as an integral step towards that change and progress,” Cassel said. “Our aim is to support the NSW Government’s vision for Gosford and the Central Coast and to help create great spaces that are vibrant and attract people into the city centre,” he said. “This will be a significant public domain spend, which is what people have been waiting for and wanting to see.”

The regional playground and public domain upgrade was announced by Minister for Planning, Anthony Roberts, in May. The provision of a regional park and playground near the Gosford Waterfront is also a key deliverable of the NSW Government Architect’s Gosford City Centre Urban Design Implementation Framework (UDIF). The playground is the first city-centre deliverable for the repurposed CCRDC since CEO, Michael Cassel, took on the position in May. “There is a lot of opportunity for Gosford, and we look forward to our role in helping facilitate lasting change,” Cassel said.

The community was invited to share ideas through an online engagement portal, where people could use pins and make comments, but the invitation to the community was not received by Central Coast Newspapers in time to be able to assist with the campaign. “We have postcards that you can pick-up from the Central Coast Regional Plan Info Centre on the corner of Mann and Donnison Sts, where we also have a map set up that you can provide feedback on,” he said. “The engagement will be used to help the landscape architects plan the whole park, where the regional play space goes, where we make upgrades to the larger grassed areas and more.” The campaign ended on October 3.