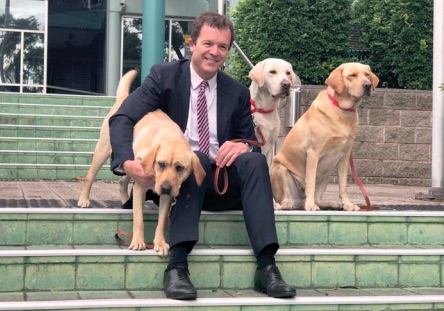 Therapy dogs have reported for duty at Gosford Courthouse for the first time, as part of a program to reduce anxiety for vulnerable people, according to Attorney General, Mark Speakman.

“Guide Dogs NSW/ACT have finished training two Labradors who will now attend court on Mondays, Tuesdays, Thursdays and Fridays, to comfort anyone doing it tough,” Speakman said. “The dogs have been specially selected for the Canine Court Companion program because of their gentle nature and ability to happily interact with strangers,” he added. Speakman first announced that Gosford had been given the green-light to assume the program following a successful pilot program in Manly Courthouse.

“The pilot program was received as a success by 100 per cent of court users, including victims of crime, lawyers, court staff and police, who said they felt more relaxed after patting and chatting to the dogs,” Speakman said. As part of the program, therapy dogs will be located in foyers, waiting rooms, safe rooms and witness rooms across Gosford Courthouse, as required.

Speakman said Gosford is the first courthouse in regional NSW to introduce therapy dogs under the program. “Gosford Courthouse is a busy and often stressful environment, and the sight of floppy ears and wagging tails will be a welcome distraction for court users with a lot on their minds,” he said.