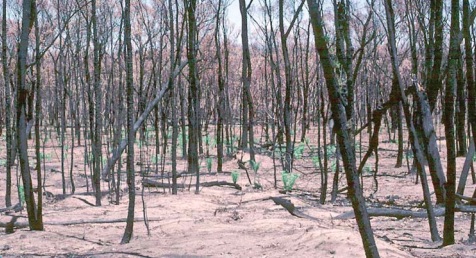 The Australian Coal Alliance, the first community group in Australia to fight coal seam gas exploration and drilling, has welcomed the NSW Government’s buyback and cancellation of Petroleum Exploration Licence (PEL) 461, bringing an end to gas exploration on the Central Coast.

The ACA’s, Alan Hayes, said it was an excellent thing for the community to stop Coal Seam Gas. “The Dooralong and Yarramalong communities were the first people in Australia to fight Coal Seam Gas 14 years ago,” Hayes said. “We were successful, we were the first people in this country to bring a halt to Coal Seam Gas.” Hayes said the fi ght took 15 months, and the mining company already had “two gas wells and the flaring pipes going” in the valleys. “When you came in there at night, it was so bright it was unbelievable,” he said.

“They were fracking like crazy.” According to Hayes, locals acquired shares in the publicly listed Sydney Gas and gave their voting proxies to members of the media who also held shares. “So we got all the media into the AGM and they could not do anything about it,” Hayes said. “That is when we fi red up with the hard questions. “Because of the media campaign, we were able to drive the share price from $1.27 to around 23 cents a share.”

Sydney Gas had to enter into an agreement with the community not to do any further drilling and also to ensure legislation was enacted excising the valleys from the PEL. “Under the Petroleum Exploration Lease, they can come in and have office buildings, they can have roads everywhere, and you have no rights. “In any event, the ACA does welcome the decision by the Berejiklian Government to cancel the PEL. “It is a move in the right direction, but I suspect the only reason they have made that move is because they want to garner votes, and they want to win the seats of Swansea and Wyong.

“I wish them all the luck, but I don’t think they are going to be successful, because people have long memories about what this Government has done. “If they are serious about winning those seats they need to be mindful of their ‘no ifs, no buts guarantee’ and bring to a screaming halt the Wallarah II mine before the next election. “They need to do what they said they were going to do and stand up and be counted as decent politicians. The NSW Greens also welcomed the NSW Government announcement that it had cancelled the PEL 461 coal seam gas exploration licence on the Central Coast, following strong community opposition.

Greens Resources spokesperson, Jeremy Buckingham, called on stronger action from both the NSW and Federal governments to protect communities against the impacts of coal seam gas activities. He said the NSW Government should cancel the remaining coal seam gas licence covering Santos’s mega gas field proposal in the Pilliga, and the Federal Government must halt gas exploration off the Central Coast. “The buyback and cancellation of the PEL 461 exploration licence is a great win for the local community and all who have joined the fight to protect our land and future from coal seam gas,” he said. “But there is important and unfinished business when it comes to protecting communities from the dangers of coal seam gas exploration and production. “The Central Coast community does not support an offshore gasfield off its coastline that would put at risk whales, marine life and threaten valuable fisheries.

“Prime Minister Scott Morrison should prohibit offshore gas and oil development off the NSW coast. “All NSW communities deserve equal protection from the risks of coal seam gas, farmers and landholders need safety as much as urban communities in marginal electorates. Parliamentary Secretary for the Central Coast, Scot MacDonald, welcomed the announcement made on Wednesday, September 26, by NSW Minister for Resources, Don Harwin. PEL 461, granted in 2008, covered about 15,000 hectares around Wyee, Budgewoi and Swansea, and was owned by Our Energy Group Pty Ltd. “The NSW Government made a commitment to the community to cancel all petroleum exploration licences in the area,” Minister Harwin said. “With the buy-back and cancellation of PEL 461, we have ensured that no gas exploration can take place on the NSW Central Coast,” he said. “The cancellation of Labor’s gas exploration licence removes uncertainty for the communities of the Central Coast,” MacDonald said.

“Labor indiscriminately handed out gas exploration licences across most of the State. “The NSW Liberal National Government has removed PELs in inappropriate regions of the State. “David Harris MP was part of the toxic, irresponsible Labor Government that allowed this PEL to be approved in 2008. “This Gas exploration licence adjoined his electorate then, and he failed to stand up for his community.

“The NSW Liberal National Government has a sensible NSW Gas Plan in action. “We have reset the industry to ensure it moves forward on this government’s terms. “The NSW Government has now reduced the footprint of coal seam gas (CSG) exploration from more than 60 per cent of the state under Labor, to less than seven per cent,” Mr Harwin said.