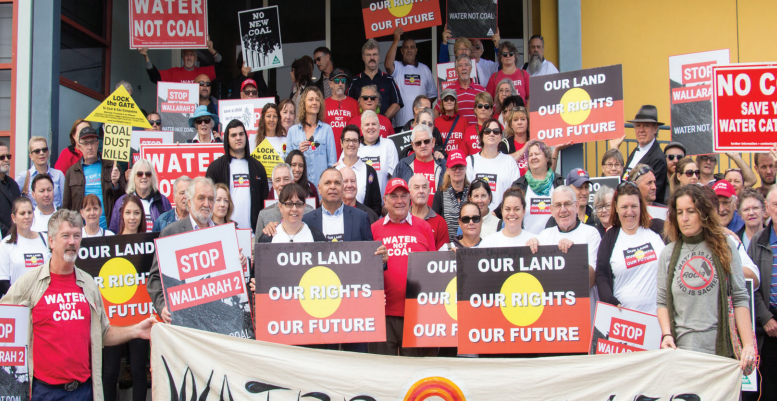 The rally outside the PAC public hearing into the amended DA for the Wallarah 2 coal mine. Archive April 2017

The recently appointed Federal Environment Minister, Melissa Price, has extended the deadline for her decision on whether to give the Wallarah 2 coal mine the green light under the Environment Protection and Biodiversity Conservation Act.

On September 27, the timeframe for the EPBC Act decision was extended until November 9. The extension was put in place “to enable Minister Price to consider the implications of legal proceedings currently before the NSW Land and Environment Court that appeal the NSW Government’s decision to approve this project”, according to a statement from the office of the Member for Robertson, Lucy Wicks.

Australian Coal Alliance spokesperson, Alan Hayes, said he congratulated Minister Price on her decision to extend the deadline and encouraged her to recognise that the Independent Expert Scientific Committee had not properly considered the water trigger in its most recent advice back to former Minister, Josh Frydenberg. According to Hayes, water samples obtained during Coal Seam Gas exploration in the Dooralong and Yarramalong Valleys in the early 2000s, indicated high levels of salt and barium when measured against the Australian Drinking Water standards. “This is the same water that would be coming out of the mine, and that is why the miner has said they would leave it until after approval to give any details about how they would propose to treat that water.

“The water that was a by-product of the Coal Seam Gas wells was transported for disposal at South Windsor in 2004- 05. “It could not be fully treated, it was not fi t for human consumption. “I am thankful for Lucy Wicks, who did what she undertook to do,” he said.