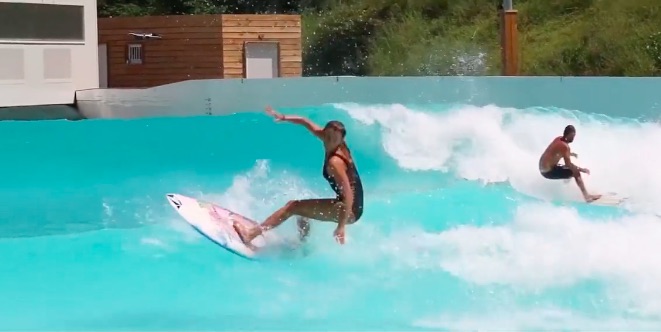 Testing at Melbourne's UrbnSurf venue will open in 2019. Image: UrbnSurf

A draft Tourism Opportunity Plan to be presented to Council in November, will consider opportunities for a wave park for the Central Coast.

The plan will include a shortlist of potential sites considered suitable for a wave park. A workshop will be conducted for Councillors to develop a policy for Council when considering unsolicited proposals for tourism development on the Coast. Mayor Jane Smith said Council needed to consider all opportunities to increase tourism on the Central Coast and that is what the plan would deliver.

“Tourism is a significant industry on the Coast, injecting $867m into the economy in 2016 from 4.85 million visitors,” Mayor Jane Smith said. “This does mean lots of jobs now, but we must grow the industry even more so that it continues to deliver more employment opportunities and economic development for our growing community. “These opportunities must be well considered, which is also why we need to develop a comprehensive policy so that we can ensure that we maximise the right tourism opportunities for the Coast.” Council noted that the resolution did not commit Council to provide financial support to a wave park for the Coast.

Clr Bruce McLachlan moved the motion for Council to investigate the opportunity to attract a major water park to the Coast, seconded by Clr Jilly Pilon.

Clr McLachlan saw off two attempts to amend his motion before it was carried, with only Mayor Smith opposed. “Let’s have a look and see if we can attract this industry to the Central Coast,” Clr McLachlan said, opening the debate at the October 8 Council meeting. He cautioned that other areas were actively looking at opportunities for wave pools, and if Central Coast Council was not proactive, it would be beaten to the opportunity by another region. “What I am asking is, could the staff have a look that we have got a suitable site that would meet industry standards?” he said. “It suites our demographics and it would have to have local membership, like a golf club, to make it work.

“They do like an area that has a core group of surfers.” According to Clr McLachlan, the typical cost to use a wave pool would be $45 to $50 per hour or $5 per wave, which would make it attractive to schools and tourists. Clr Pilon congratulated, Clr McLachlan, for his motion, given that he had been “pushing for a number of years and had done a lot of research. “It is unfortunate that two years down the track, we do not know what sites are available on the Coast.”

She said all Councillors had recently been contacted by a Gold Coast company working on tourism and major projects. Company representatives met with Clrs Pilon and McLachlan, and Mayor Smith, and said that they could do feasibility studies costing between $100,000 and $200,000. “We seem to miss out on everything for major tourism projects, we need to work hard on securing sites and we need to be prepared and ready to jump on opportunities.”

Clr McLachlan said: “If we do this properly and make an announcement that we are looking for a wave park, we will flush people out to come and talk to us, and it may be that it ends up on private land.” McLachlan said if the wave park were to be built on Council land it could be on the basis of a “ground lease with rental paid” via a leasehold title and rent payable.” Clr Doug Vincent said that all that was needed at this stage was a list of potentially suitable sites that Council staff could nominate for wave park operators to investigate further. “The original motion is for us to make a forthright decision for industry to come to the Central Coast on a selected site that might be public land, crown land, private land or Darkinjung land,” Clr McLachlan said. Following the meeting, Clr McLachlan, said: “Central Coast Council has voted to now try and identify suitable sites that could be offered to the growing Wave Park industry, and to actively try and attract new, private investment monies to the region.

“Council doesn’t build or operate these parks, they are major investments, but your Council can, and should, be a key catalyst in progressing new major tourism and employment projects for the Central Coast,” he said.

“Ideally I would like to see an Adventure Sports Precinct with Wave Park, mega indoor skate, BMX, rock climbing, with coaching clinics, created. “It would be a major drawcard for the region. “Unfortunately, I tried to get our former Councils to do this in 2016, and again this year with the Old Sydney Town opportunity, and we are now playing a catch up game, and may have already lost the opportunity to another region, but it’s now at least a step in the right direction. “We have 5 million people within a two hour drive of the Central Coast. “It’s time we started being pro-active in capitalising on our markets, instead of watching the Hunter Valley grab every new amenity north of Sydney.”

Image from UrbnSurf in Melbourne – that will reportedly open to the public in 2019.

As a readers service we’ve found a video link to the History of Wave Parks.