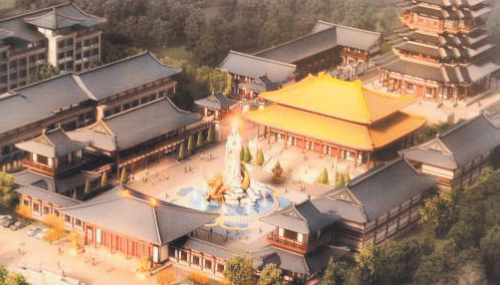 Artist's impression of the theme park with buddhist statue at the centre. Archive image 2016

Land at 1 Warren Rd, Warnervale, which was to be the site for the Chappie Pie China Time Theme Park, will be sold by Central Coast Council.

Councillor Louise Greenaway called for the sale of the land, and her motion was carried when Council met on Monday, October 8. Greenaway moved for Councillors to request a report from the Chief Executive Offi cer, Gary Murphy, by November 26, in relation to listing the 16 hectare site. She asked her fellow Councillors to vote to use proceeds of the sale for specifi c purposes, rather than paid into general revenue.

“The specific purposes will be subject to discussion and further resolution of Council,” Clr Greenaway said. She named “specifi c purposes such as items in the greater Warnervale region, including but not limited to, the Wyong Employment Zone (WEZ), Warnervale education precinct and Warnervale town centre”. She also asked for reports provided to the former Wyong Council on November 14, 2012, to be included with the report that comes back from the CEO, whilst acknowledging that one of the reports may have to remain confidential. Clr Greenaway said she hoped her motion would have unanimous support.

“The motion is to sell land, but its intent is to create local jobs and to activate the Wyong Employment Zone to drive economic development,” Greenaway said.

“According to a staff report provided to the former Wyong Council at the Ordinary Meeting of November 14, 2012, the Theme Park proposal began with an approach to council to build a Chinese museum. “The proposal changed, and Wyong Council entered into a contract to sell the land to Australia Theme Park Pty Ltd to build what was touted as a $500m Chinese Theme Park. “The staff report states that studies were undertaken in support of subdividing the land, which cost ‘in the vicinity of $300 000’. “Council undertook works on the subdivision and cleared eight hectares in early 2012, advising that ‘the costs of the works currently undertaken by council are in the vicinity of $2m’.

“It is unclear if the $2m included staff time, legal advice or further consultants’ reports. “Completion of the sale was delayed and, after some years of controversy and speculation about whether it would ever occur, it was announced that the deal was off. “It appears that the cost to the ratepayers of the former Wyong Council was at least $2.3m. “Council was able to retain the $600,000 deposit, but it appears that there was a net loss of $1.7m. “This net loss to ratepayers, where it appears in the budget and/or how the debt is being serviced, are yet to be clarified. “The sale of the Chappie Pie site will recoup some of the monies already spent on the site. “It is located within the WEZ, a State Signifi cant Site designed to attract and accommodate large employers and new forms of industry to help boost jobs.

“Development of this site should create hundreds of new jobs. “That’s hundreds of people no longer needing to commute, who will now be able to spend more time in their local communities, using services here, buying goods here, joining clubs here. “Many, if not all, Councillors have expressed their desire to create local jobs so here is a great opportunity. “The site has the potential to generate investment and interest in the Warnervale area, which will support the economic development of the long overdue Warnervale Town Centre. “The site has great transport links, being located adjacent to the M1 and the SydneyBrisbane freight line, perfect to attract signifi cant industrial and hopefully innovative businesses. “The last part of the motion speaks to the application of the funds received from the sale. “These monies will clearly be a ‘one-off’, so in my view, they would be best applied to a one-off project.

“Given that this land is in Warnervale and the former Wyong Council residents are the ones who have already had their rates spent on the previous deal, I feel it would be reasonable to identify projects in the greater Warnervale region as the recipients of the monies. “The decision about the sale proceeds will be subject to a further resolution of Council, but I just want to fl ag my views in anticipation. “This motion is about selling land and recouping money, but its broader intention is to create jobs, activate the WEZ, and fund much needed projects.” Clr Doug Vincent, who seconded the motion, said it would mean fi nally moving forward with the WEZ. Clr Vincent said Councillors had received briefi ngs from staff stating that 5,287 homes would be built in the area within a relatively short period. “Figures have quoted that 6,805 jobs could possibly be put into the WEZ and Warnervale town centre, so this Council, if fair dinkum about the WEZ, should act,” Vincent said.

“Council should progress selling that land at a price benchmarked against a just terms valuation,” he said. “If we can sell that land and have staff provide us with the best projects, so that we could put the proceeds from the sale of that land into that area, I would say this is the biggest job number quotation we have had in this chamber for some time.” Clr Greg Best said he was opposed to specifying how proceeds should be spent. “To quarantine revenue from these types of disposals sets an interesting precedent and could lead to a counter argument for further one off selling,” Best said. CEO Gary Murphy replied: “It is a matter for Council to determine how revenues will be spent. “I certainly take the intent of the proposal that it is not to go into the general fund,” Murphy said. The motion was passed and those who voted in favour were Clrs Mehrtens, Sundstrom, Matthews, MacGregor, Greenaway, Vincent, Hogan and Mayor Smith.