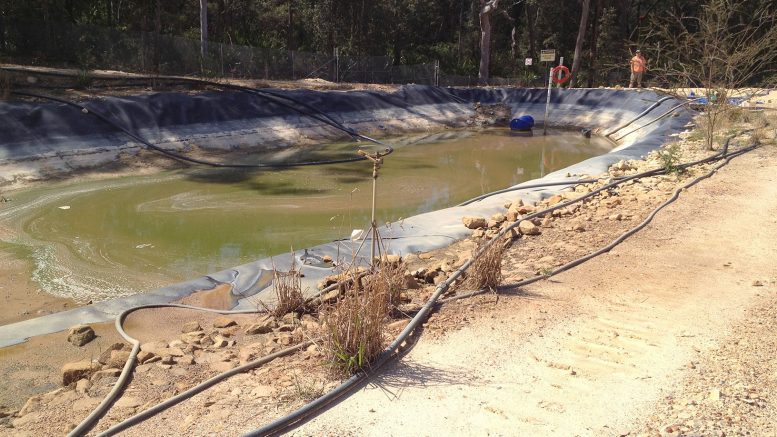 A Gosford Council photograph of a leachate pond at the landfill shows pipes and sprinklers indicative of poor leachate management. Archive image 2016

Residents in the northern areas of the Central Coast have been asked to support a campaign to protect the region’s water supply by opposing the reopening of the Mangrove Mountain landfill.

“In this edition of the Wyong Regional Chronicle a Public Notice has been inserted by the Environment Protection Authority (EPA) under instruction from the Land and Environment Court (LEC),” said Stephen Goodwin, spokesperson for the Mountain Districts Association. [The advertisement appears on page 9.] “

The aim is to invite the public to make submissions on the Mangrove Mountain Landfill issue to the EPA who will pass them on to the Court and the landfill operator, Verde Terra Pty Ltd, which has applied to have its licence renewed,” he said. “This public consultation is a pivotal moment for the community. “If it fails to voice its opposition in a decisive manner, to having a massive landfill in the Central Coast’s water catchment area, the Court may see that as tacit support for the landfill.

The EPA and Central Coast Council are joined in opposition to Verde Terra,” Goodwin said.

“The landfill has lain idle since 2014, although there is still the matter of 800,000 cubic metres of waste sitting there, most of which does not have an effective lining underneath to prevent the escape of toxic leachate into the groundwater. “Scientific study has demonstrated that almost half of the stream fl ow in Ourimbah Creek comes from this groundwater. “Central Coast Council pumps out of Ourimbah Creek into Mardi Dam. “Water in Mardi Dam is shared with Mangrove Creek Dam. “These are the two potable water storage facilities for the entire Central Coast. “On behalf of the entire Central Coast community, Mountain Districts Association has been intensively engaged for over four years, to end this threat to the regional water supply. “Presently the matter is in the Court as is explained in the EPA Public Notice.

“The landfill operator, Verde Terra Pty Ltd, has applied to have EPL 11395, that regulates the activities at the landfill site, varied to enable it to resume operations. “Its application was refused by the EPA and Verde Terra has appealed this decision in the Court.

“If successful, this will authorise the importation of 1.318 million tonnes of new waste in addition to the existing vast waste mound. “On behalf of the community, Mountain Districts Association vigorously opposes this application and calls on members of the general public to do the same by making a submission to the EPA. “In addition to the Verde Terra application, there are a large number of supporting documents.

“These are the documents submitted to the Court with the application. “It is not necessary for members of the general public, who are concerned about the threat of this landfill to their water supply, to read all of these, but if you wish to be fully informed, they will be available for viewing at specified locations. “Mountain Districts Association is familiar with the content of most if not all of the supporting documents and is preparing information to assist members of the public. “The supporting document will contain the essential facts and reasons why this licence application is a bad thing and should be opposed and will contain a brief background of the issue and how to prepare a submission to send to the EPA.”

Register your interest with Mountain Districts Association by emailing: secretary@mountaindistrictsassociation.com.au

No need for enquiry if all parties do the right thing