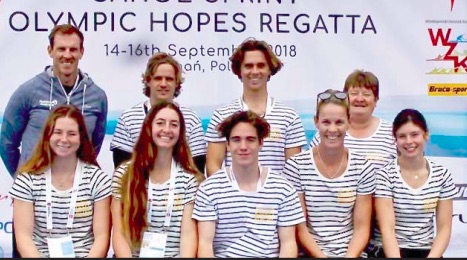 The Australian Team with coaching staff

Two Avoca Kayak Club members have returned from the 2018 Sprint Olympic Hopes Regatta, held in Poznan, Poland, in September, as the top performing pair from the Australian Team.

Fletcher Armstrong and Jarrah Sheppard, were a part of Australia’s six strong team, competing against some of the world’s best Olympic prospects in the Under 16’s age bracket. Olympic champion Ken Wallace, (Qld) as well as Rio 2016 Olympian, Alyce Burnett, (Qld) coached the team and were impressed by Australia’s up and coming paddle talent. “It was my first time coaching an Australian Team and I’ve really enjoyed this experience and I’ve loved helping out and seeing the guys grow. “It’s really exciting to see these guys and girls come through the ranks and putting on the green and gold. “I’m so proud of how the team trained and raced over the last fortnight and coaching them has been an absolute pleasure.

“The future of paddling in Australia sure is looking bright,” Burnett said. “It’s exciting to see the young kids putting on the green and gold for the fi rst time and come tearing down the course, trying their hardest to make it through the semis and into the finals,” Wallace agreed. The under 16 men’s K2 1000 with Armstrong and Sheppard, as well as the Under 16’s women’s K2 500 with Sunshine Coasters, Jenaya Massie and Phoebe Wills-Grace, were Australia’s strongest events, with both crews making it through to the finals and finishing fourth and ninth respectively. Fletcher Armstrong and Jarrah Sheppard kicked-off the event with a spot in the A-final and a strong fourth place finish in a close race that was tied for second. With this result, the pair were the top performers on the Australian Team.

But even getting to the final was a big achievement after the pair managed to progress to the semi-final despite a broken paddle. “The day started off with a sixth in the heat after my paddle came apart three times during the race, but we were pretty stoked to go from sixth in the heat to fourth in the final”, Jarrah said. “Obviously second or third would have been nice, but there were some big and quick guys out there and we are just happy how we finished this year,” he added. Jarrah also finished 18th in the K1 500 and 27th in the K2 200 together, with, Lincoln Loughry, after the pair posted a sixth place in both the heat and semi-final. Armstrong also had a strong performance in the K1 200 and missed the final by a margin of just under 0.7 of a second, and a third place in the semi-final to finish 14th overall.

“I’m still happy with how I raced, although a bit disappointed it wasn’t the outcome I was working towards. “I’m still pretty happy to end up 14th in the world. “Onwards and upwards, I believe,” Fletcher said. Armstrong also finished 23rd in the K1 500 after a fourth place in the heat and a sixth in the semi-final. The Olympic Hopes Regatta is recognised as one of the pinnacle International Canoe Sprint events for athletes, who are under 15, 16 and 17 years of age. The event saw some of the best young sprint paddlers in the world, representing 21 countries, and provided a high-level competition for Australia’s up and coming canoe sprint talent.