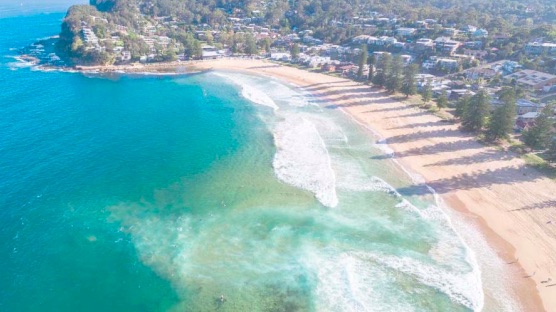 Avoca Beach is receiving a safety upgrade this summer, with the beach confirmed to be a part of the NSW Government’s 2018 drone program.

Surf Life Saving NSW will be assisted by drones at fifteen locations along the NSW coast this summer, enabling potential risks to be spotted faster than ever before. Member for Terrigal, Adam Crouch, said the expansion of the drone trial was good news for beachgoers in the Terrigal electorate. “We know that thousands of people use our beautiful beaches on the Central Coast during the summer months, and this drone trial expansion will help keep people safe,” Crouch said.

“The birds-eye perspective from the drones will allow lifesavers to spot potential risks faster, with potentially life-saving consequences,” he added. Crouch said that while prevention of shark attacks and drownings was the priority, the expanded drone trial would also inform future approaches for the NSW Shark Management Strategy. “This trial will be useful to assess the operational aspects of using drones by a volunteer organisation, and it will also provide more in-depth data about the behaviour of sharks in NSW waters,” Crouch said.

Minister for Primary Industries, Niall Blair, said drones have been a terrific tool to help prevent attacks and other serious water risks. “The NSW Government drone trial began at nine beaches last year, and this year it has been expanded,” he said. The drone trials will complement helicopter aerial surveillance for the upcoming school holidays and will continue until the end of April 2019. Source: