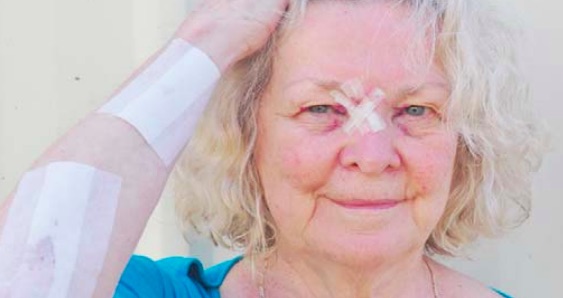 The unsuitability of Patonga public wharf as a major commuter thoroughfare has been blamed for a commuter accident which took place on the afternoon of September 12.

Upon disembarking from the Palm Beach ferry at around 5:30pm, Ms Sally Perrett was tripped by being caught up in a fishing net laying on the wharf. Ms Perrett suffered bruising to the arms and face and bleeding from a face wound, according to Mr Barry Ward of St Hubert’s Island. “Other passengers rushed to be of assistance and limited medical attention was provided at the site,” the report said. “Sally then went to Ettalong Beach Surgery where wounds were investigated. “Sally has suffered pain and anguish from this unnecessary accident. “Fortunately no bones appear to have been broken.

“Patonga is a public wharf, however, it is not suited in its current state to provide for the passenger load it is being subject to due to the failure to clear the channel at Ettalong. “Combining the net fishermen and passengers is just a recipe for disaster and this is such a case.” Mr Ward said he was walking behind Ms Perrett at the time of the accident. “I saw it all unfold before me,” Mr Ward said. “Luckily another passenger had a cloth to stem the bleeding and I had a first aid kit in my car so we were able to patch her up and go directly to Ettalong where, fortunately, the doctor was on duty,” he said.

Ms Perrett said she still had two black eyes on Thursday, September 20, but intended to make her usual trip across to Palm Beach on the ferry that morning. “I volunteer in the Red Cross Shop at Newport and I do Tai Chi at Dee Why so I use the ferry two or three times a week,” she said. Ms Perrett usually caught the ferry from Ettalong before it stopped operating in May due to the state of the channel. She said the diversion to Patonga was “shocking” due to the poor state of the road, lack of parking and unsuitable sharing of the public wharf with commercial fishing operators. Mr Ward said he had sent his report on the incident to Central Coast Council but had not received a response.