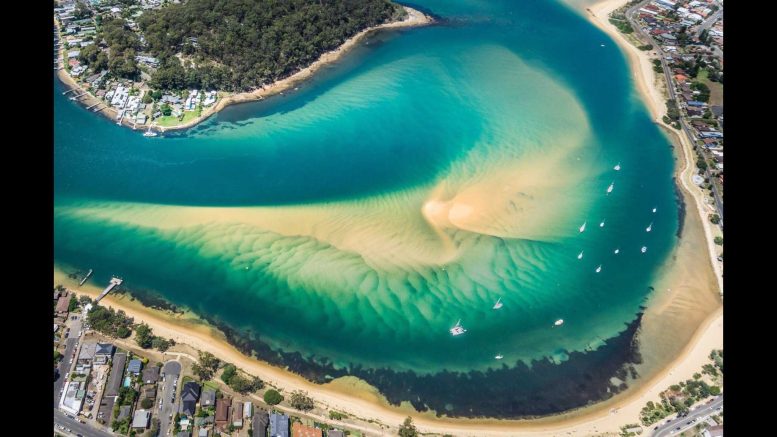 Aerial view of the build up of sand in the Ettalong Channel by early December 2017. Image copyright Andrew Smith (see link in article).

Keeping the Ettalong channel navigable and controlling erosion from Ettalong to Ocean Beach would be a $100,000-a-year job if those in charge simply worked with nature.

That is the opinion of Community Environment Network chair Mr John Asquith. “There are many opinions being expressed about the channel and most of them are by people who do not understand the science of coastal geomorphology, coastal engineering and how the system works,” Mr Asquith said. “The sand that is in the channel, whether it is at Wagstaffe, or the current deposit off Little Box Head is continually moving,” he said. “It moves roughly in a figure eight, which is how scientists have explained it to me, and where it comes from is Ettalong Beach. “It comes off the western shore, gets cut out by the outgoing tide, and gets into that system of moving around,” Mr Asquith said. As a result, the navigation channel develops two major pinch points over time, one adjacent to Wagstaffe and the off Little Box Head. “If you don’t put that sand back on Ettalong Beach when you dig the channel out, nature will still take sand off Ettalong Beach.” In other words, according to John Asquith, sand will end up back in the channel, no matter how much money is spent on dredging. “We live in a continually changing and dynamic environment. “Nothing is static around us.

“The solution is not to make it worse because the estuary management plan for Brisbane Water recognised this pattern exists. “What we’ve got to do is keep the channel navigable at the pinch points. “We dig that out, but what we have got to do is put it back on Ettalong Beach. “If we work with nature, we won’t have erosion at Ettalong Beach because we will put the sand back where it came from. “The second thing that is going on, and Ocean Beach is one that I have looked at closely, is erosion. “Ocean Beach gets cut away in storms, as all beaches along the NSW Coast do, and the thing that saves them is the dune vegetation behind them because that slows the cut out during a big storm. “That sand gets taken offshore and that is the bar you see sitting off the beach. “That is the sand that has been taken off the dunes and put out there. “Again it is part of a circular system and we have got to put it back. “There are ways of doing that, they involve using machinery if you want to accelerate it. “That sand during normal oceans will get slowly brought back into the inter-tidal zone.

“So what you do is beach scraping, where that sand, because it has been delivered by the water, is pushed up the beach to the dune. “Water is powerful. Wind is nowhere near is strong. “So you scrape that sand, push it up there and nature will use water to take a bit more of that offshore sand and dump it and about six months later you will need to come back to scrape it again. “If we worked with nature, annual dredging would be a $100,000-a-year job, everyone would have navigation and nature would continue to play its games with the sand.” Mr Asquith said he had been having conversations with local parliamentarians and Central Coast Council about his understanding of Broken Bay system. “Council has good scientists working for them but they get overpowered by people with dogmatic views who have no expertise in the area what so ever,” he said.

A link to the Video Interview can be found in our video news section.

Heated debate over what to do about The Entrance Channel