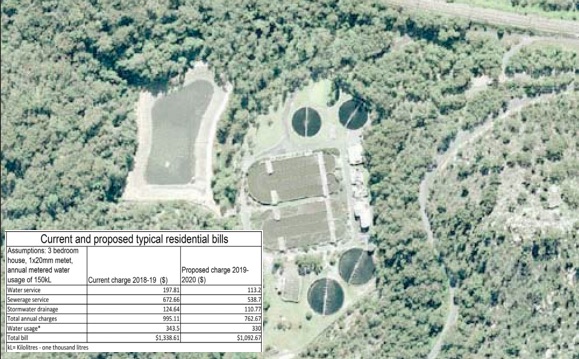 Water, sewerage and stormwater charges on the Peninsula (and Central Coast) are likely to drop with the alignment of prices across the Central Coast.

Average residential water bills would be reduced from July if Central Coast Council’s recommendations to a review of water, sewerage and stormwater prices are adopted. The proposed water usage price would be reduced to $2.20 per thousand litres and the water service charge reduced to $113.20 per year.

The proposed water and sewer rate changes. Have your say at the IPART review.

Council’s proposed prices would affect residential customers in different ways depending on how much water they used, whether they owned a house or an apartment or were eligible for a pensioner concession. The submission detailed a four-year capital works program and agreed service levels. “A number of capital works programs have been identified to improve water supply security including an upgrade to the Mangrove Creek Dam spillway,” Ms Nel said.

Over the past five years approximately $90 million for operational and capital works has not spent. “Council proposes that this money is allocated to deliver a program of upgrades to the water, sewerage and stormwater drainage networks,” the submission said. “This will include an increased water mains renewal program and additional upgrades to its sewerage system.

“Revenue variance amounts attributed to water, sewerage or stormwater drainage will only be used in the same specific area which generated the revenue,” the submission said. The Council reported that, in the past four years, customers had experienced discoloured water, sewage odours, pricing differentials (especially in relation to retirement villages), fluoride, taste (chlorine), water security, water main breaks, response times and follow up work. Council had recorded water quality complaints of 9.9 per 1000 properties, 151.8 unplanned interruptions per 1000 properties and 23.7 water main breaks per 100km.

It also recorded 32.6 sewerage overflows per 100km. A specific water and sewer complaints management framework had been established to improve areas of underperformance. Council told IPART its operations would now focus on the introduction of a 24-hour seven-day a week water operations centre, the use of new technologies to improve monitoring and performance and improved water quality.

Chemicals used to treat the water would be changed to reduce the “chlorine residual”. Another aim would be enhanced waterway health through early detection of sewerage chokes and overflows.

The community has opportunities to provide feedback direct online to the IPART review by October 12 and/or by attending IPART’s public hearing on November 27. ( information link here).

Hard to sustain growth with a 43 per cent rate rise