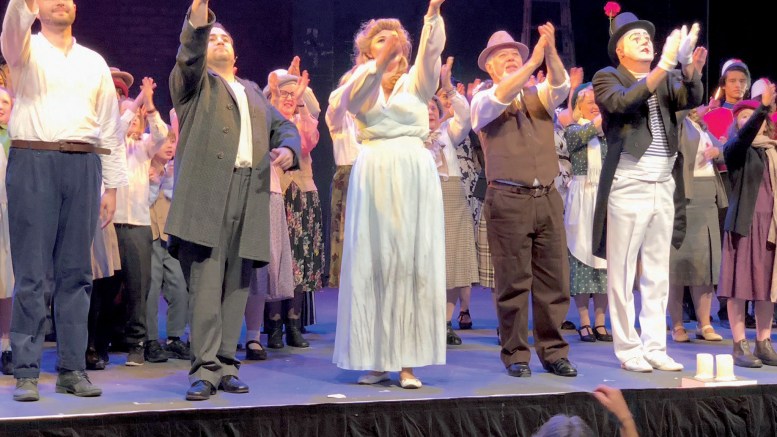 The cast of La Boheme in Gosford accept ovations from the crowd.

The Central Coast Opera production of La Boheme, exceeded expectations at the opening night on Saturday, August 18, at the Laycock St Community Theatre, North Gosford.
“It was an exhilarating performance, a fantastic production by multi-talented musicians and singers,” said reviewer, Stephanie Short.
“The Opera, by Puccini, was sung in English and set in the depths of winter in post-war Paris.
“It is a four-act opera, first performed in Turin, Italy, in 1896.
“La Boheme is a true love story, an original romantic comedy with a tragic ending, as the beautiful young Mimi dies of tuberculosis in the final scene.
“The beginning is great, with a few young men burning sheets of poetry to warm up the room, artists living in poverty in a garret in Paris.
“Warwick Doddrell, the director, worked magic with the lighting, which was beautiful and subtle,” Short said.
“The orchestra was very good, particularly the violin solos, which were exquisite.
“The orchestra underscored the dramatic tension.
“The chord structure and harmonies brought us all to tears in the final scene.
“The conductor and musical director, Patrick Brennan, is fantastic.
The Central Coast Opera is thriving under his inspiring directorship.
“We could hear the orchestra very well indeed, despite the Laycock Theatre not being purpose-built for an opera.
“The chorus master, Phil Rees OAM, produced an outstanding chorus and children’s chorus.
“The setting in Paris in 1946 in winter gave them lots of scope with costumes, sets and so on.
“It was minimalist, but it worked well, because there were not too many set changes to distract the audience.
“It was appropriate for the era,” she continued.
“The transition from the market to the café was great.
“I am not sure about the abundance of fresh flowers in the market though, in Paris, in the middle of winter in 1946?
“Members of the community who volunteer their time for the chorus, can listen to the chorus piecing together all the disjointed melodies and cues to make it a cohesive whole.
“For local community members in the chorus, it is a great way to cut your teeth on repertoire and being able to experience the score, and be part of the show, while listening to the principals and learning, and appreciating, what they do.
“It can be years before one reaches the height of a Mimi, of singing such a major role.
“Imogen Bilinsky, an emerging artist, is one such member of the chorus, having just completed her Bachelor of Music at the University of Newcastle.
“There was a very good connection between the orchestra and the four lead singers.
“Their voices were all marvellous.
“Mimi (Livia Brash) has a lovely voice and stage presence.
“Rodolfo (Branko Lovrinov) has a great voice,” Short said.
“Marcello (Alex Sefton) was excellent.
“He has a brilliant voice.
“He was a star.
“Musetta (Hannah Greenshields) sang and performed the flirtatious role beautifully.
“No one missed a cue or a line.
“The men’s diction in English was better than the women’s.
“This is one of the difficulties with sopranos of course.
“The Central Coast Conservatorium gives performers the opportunity to learn and develop.
“The dancing was delightful.
“The children were great, and the marching band provided such a lovely light atmosphere.
“It was joyful until the very end,” Short said.

Conservatorium now has a specially made harpsichord