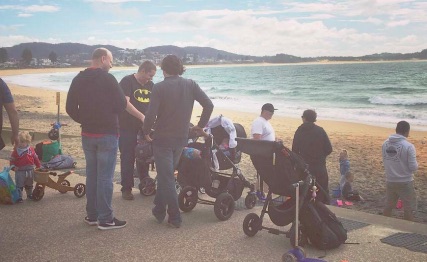 A new study exploring postnatal depression in fathers is being pioneered by a team of researchers from the University of Newcastle (UON), Ourimbah Campus.

The team are the brains behind the What About New Dads (WAND) study, a 15-minute survey which focuses on the paternal and psychological wellbeing of new dads. According to data from the Parenting Research Centre (PRC), one in five fathers say they have suffered symptoms of depression or anxiety since having children, and of these, nearly one in 10 feel they have experienced postnatal depression.

The PRC found that fathers with poorer mental health: were less likely to feel effective as parents; were more likely to feel that they were too critical of their children and had less patience; were more likely to wish they spent more time with their children; felt they were less consistent in their parenting; and, were less confident in helping their children at school. WAND was developed by UON PHD student, Jaime Wroe, who said the study came about after a recent focus on men’s mental health in relation to parenthood, captured her interest. “The importance of maternal mental health is well known, and there’s a broad range of services to support women during the transition to motherhood.

“But what about dads?”

Wroe said. “New fathers may also experience distress in their adjustment to parenthood, which can then affect the cognitive, emotional, social and behavioural development trajectories in infants. “In short, dads’ mental health and wellbeing definitely matters” she said. To grow her study, Wroe reached out to Central Coast local and young dad, Luke McMahon. Luke is the dad behind the Central Coast Dilf Club, a new informal social and support group for Central Coast dads. The Club recently took part in Wroe’s study to support the development of better men’s and dads’ mental health services. According to Luke, what originally started as a tongue in cheek Facebook group for young dads has quickly grown into a large network for men to share and connect over parenting stories and struggles.

“Going from having to pretty much only having to worry about yourself to having a new baby, is a huge shock to the system,” Luke said. “I’ve got two young girls and being a new dad is wonderful but it can also be overwhelming. “I struggled a lot with that feeling of helplessness and responsibility and the sense that I had no idea what I was doing. “That was one of the reasons I started the Dilf Club. “I just wanted to make a Facebook group for dads to share their funny stories and to be able to ask for ideas and advice about some of the things they’ve struggled with adjusting to parenthood. “I had no idea it was going to blow up the way it has,” Luke said. Since starting the Facebook group in July just for dads in Luke’s local area of Wamberal, membership has swelled to almost 300 local men who connect with one another about the one thing they all have in common, fatherhood.

Use public land for research and public benefit says Mayor