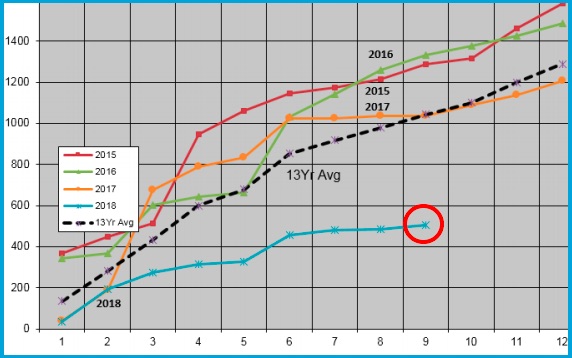 September has arrived and with it, some much-appreciated rainfall, with the ninth month recording rainfall events across five of its first seven days.

After an extremely dry August, which saw three bushfires ravage nature reserves across the Peninsula, the wet week that was is a positive sign for the Peninsula. As of September 7, 21.1mm of rain has been recorded according to data compiled by Umina’s Mr Jim Morrison. It’s a result that has water tank users cheering as the NSW Government’s statewide drought warning persists.

The rainfall also comes as a pleasant surprise compared to last year’s record, which saw just 1mm of rain across the entirety of the month, meaning in the first week of September 201 saw more than 20 times the rainfall of September 2017. The Peninsula had its heaviest single-day rain event on September 4, when 14mm was recorded, the highest single rainfall event since June.

The September rains have brought the Peninsula’s yearly rainfall total up to 505.9mm, this is still less than half of the region’s 2017 yearly total of the same time, 1033.9mm, but still bodes well for water watchers everywhere. The wet week spells hope for the rest of the month in a year that has seen disappointing falls. The spring months have traditionally been wildcards when it comes to rain on the Peninsula, so the region could well see some much-needed downpours over the coming months.