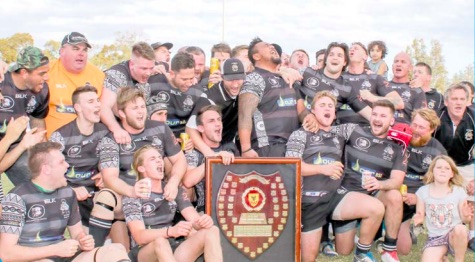 The 2018 Central Coast Rugby Union Competition has seen Ourimbah crowned 2018 Premiers, after a supercharged match of rugby against Terrigal, at Woy Woy Oval, on Saturday, September 15.

Played in fine and very warm conditions, both teams commenced the match with a display of very tight rugby in the opening 10 minutes. It was truly grand final rugby, where no quarter was given or asked for. Very little happened on the scoreboard during this period, as both teams were putting each other to the complete test. Both teams did have some opportunity to post points, but it was not to be until the 13th minute, when Terrigal opened the scoring with a great try to prop, Jay Grogan. The try followed up a strong forward surge by the entire Terrigal pack.

This 5 nil scoreline remained the status quo on the scoreboard for the majority of the first half. Both teams had periods of attack, but neither side was able to get that necessary breakthrough. Terrigal had the breeze at their backs and they were able to hold the ascendancy for a large part of the middle period of the first half. Terrigal were also getting a good flow of penalties, but just could not add to their tally on the scoreboard. The set pieces were very even, and if anything, the Terrigal scrum was matching it very well with a strong Ourimbah pack. It was not until the 33rd minute that Ourimbah were able to even things up, when they crossed for a try. Their try also resulted from a strong forward surge, when their prop, Will Fraser, crossed adjacent to the posts. The conversion by, Jarrod Grange, had taken Ourimbah to the lead by 7 points to 5.

This remained the score at the halftime break, so the Premiership was still very much in the balance. Terrigal were straight away on the attack at the start of the second half, and they were rewarded with a second try, when winger, Dyon Williams, crossed in the corner in the 8th minute of the second stanza. This try followed an excellent backline movement headed by five-eight, Marc Kotecsky. The conversion of this try took Terrigal to a 12 points to 7 lead in the match. Things were starting to get anxious for both teams as they entered the last quarter of the match. It was around the 20 minute mark of the second half that Ourimbah fired up. In the 18th minute, Ourimbah lock, Josefa Biu, finished a good backline movement to crash over for a converted try.

This try took Ourimbah to the lead by 14 points to 12. They quickly followed this try with another, when in the 24th minute, their centre, Owen Turner, scored a spectacular 50 metre try, which went through several sets of hands. Suddenly, Ourimbah had jumped to a handy 21 points to 12 lead in what had proved such a close contest. They were definitely in the ascendancy at that stage, however, Terrigal were not going down without a fight. They responded with their own try, when in the 31st minute, centre, Dylan Calabria, crossed for a try wide out. With the scores now at 21 to 17, the struggle and intensity in the final 10 minutes was there for all to see.

No further points were scored, but there were chances for both sides. Ourimbah were able to hang on, and at the final hooter, had secured the Premier 1 title for 2018. Both teams had crossed for three tries apiece in the match, and this fact alone demonstrated the tightness of the entire grand final. It was a good performance by both teams, but it was Ourimbah who were rewarded for being the dominant team in Premier 1 this year. It was their fourth win over Terrigal this year, and they richly deserved the Premiership. Ourimbah also bring home the President’s Cup this year, after defeating The Entrance, 20 to nil, in the Cup grand final. Ourimbah showed too much experience for their rivals and were able to grind The Entrance into defeat. Ourimbah scored four tries to nil in the match, and that was an accurate description of the flow of the entire match.

Ourimbah posted two tries in each half in what proved a very consistent performance. Best players for Ourimbah were halfback, Alex Lucas, No.8, Chris Smith, who crossed for two tries, and centre, Mark Littlefi eld. The Entrance had a great season capped off by making it to the grand final. They came from fourth position, but just could not get things to go their way on the day. Players such as flanker, Joel Laws, five-eight, Andrew Danckert, and lock, Thomas Falconer, never stopped all day. The win by Ourimbah completed a very good year for the Club. In the Premier 2, The Lakes were crowned champions, after defeating Gosford 23 to 20, in another highly contested grand final match. This encounter was an intense affair from start to finish.

The lead in the match chopped and changed right through to the very final stage of the second half. The Lakes got away to the better start, and with a penalty goal and a converted try, had jumped to a handy 10 points to nil lead midway through the first half. Gosford got themselves right back into the match before halftime with a converted try, and at the break, it was The Lakes leading by 10 points to 7. The start of the second half saw Gosford gain the ascendancy, and with a penalty goal and a penalty try, had raced to a 17 points to 10 lead. It was proving such an intense contest, and with the hot conditions, both teams were feeling the strain.

The Lakes responded with two quick tries, while Gosford kicked a penalty goal, and suddenly the scores were locked at 20 points apiece, with time running out. Both teams had some very good performers. Mark Tipple was great for The Lakes, and he crossed for two very good tries. He was supported by strong performances from fullback, Alec Herridge, and prop, Chad Goodhand, with Herridge snatching victory for The Lakes with a late penalty goal kick. The win to the The Lakes Premier 2 team capped off a wonderful season for the team.