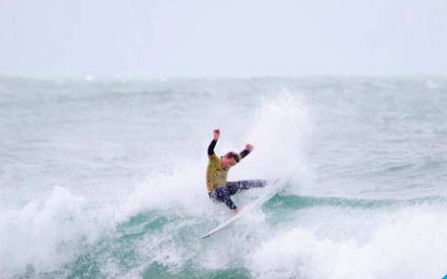 Norah Head’s Nate Hopkins has taken out the Under 14 Boys’ category of the Woolworths Groms’ Comps Series.

It was neighbour versus neighbour in the final, with Hopkins charging out of the gate to post a near-perfect 9.00 ride, to put his opposition, Bateau Bay’s, Hughie Vaughan, on the ropes. Hopkins nailed a chain of critical frontside snaps to post his huge score and prevent Vaughan from claiming his second win from as many events.

The monumental result also saw Hopkins take out the Pic’s Peanut Butter (major sponsor of the series) Star Performers Award. As an added bonus for taking out his category, Hopkins will receive an invitation to attend an all-expenses-paid, three-day Woolworths Surf Camp at the Surfing Australia High-Performance Centre.