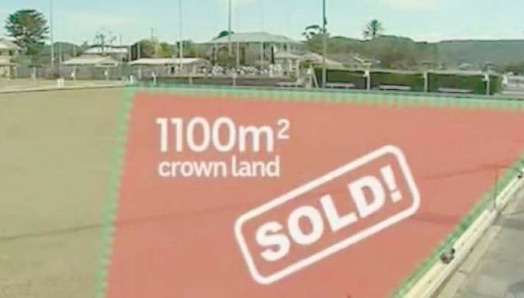 A graphic used by ABC News to show the 1100 square metres of Crown Land sold to Woy Woy Holdings for $38,000

They were answering questions in a State Parliament Budget Estimates committee from Shadow Minister for Lands, Mr Mick Veitch and Greens MP Mr David Shoebridge on Monday, September 3. During the questioning, the Department denied the land was sold below market value and blamed an operator error for the sale being advertised in Batemans Bay. Mr Veitch asked Mr Reynolds to explain why the land had changed hands for what appeared to be significantly below market value. “The documents, consistent with our standing practice at the time, sought agreement from the appropriate delegate on a range of matters associated with the sale,” Mr Reynolds said. “The officer concerned did what I would call a desktop appraisal of what it was thought the value of the site would be. “In my view, that was entirely appropriate. “That was not done to pin to the back of a sale or the exchange of contracts but to inform some decision-making at a conceptual level about whether or not it was appropriate to pursue the sale with the applicant.

“Rather than spending too much time and effort until the decision was secured about whether or not to go to step two, the department looked at the statutory land value of the adjoining site and applied that pro rata across this site.” Mr Veitch then asked Mr Reynolds whether he believed the sale price represented market value. Mr Reynolds said: “No, I do not. “There is a separate process that deals with obtaining market value. “That is done by independent licensed valuers, which in fact did occur. “It is understandable when looking at the evidence that was made available through the GIPA request to form the view that there were two market values, but there were not. “We need to be very careful when we talk about market value or a desktop appraisal and internal due diligence about whether or not this is in the department’s interests and whether it should go to the next step.

“So I think it is about finding the right balance of investing effort, time and cost or having a graduated approach to that, which is what the department did. “At no stage did the records, that I have read, cite the $121,000 as being market value. “In fact, it never was, and it was never purported to be such.” Mr Veitch to Mr Toole: “Do you know why a public notice about the intended sale of Crown land at Woy Woy was published in the Batemans Bay newspaper?” “I am aware of a report about an advertisement placed in another newspaper,” Mr Toole said. “When I heard about it, probably a number of weeks ago, I raised it with the department and asked that it conduct an internal review of the sale of the land at Woy Woy,” he said. “People were making statements that they intended to go straight to other authorities.”

Mr Shoebridge confirmed that he had referred the matter to the NSW Independent Commission Against Corruption. “What I wanted to do was to work out exactly what had happened in this space in the past,” Mr Toole said. “This is something that goes back to 2004. “I asked Mr Reynolds to examine the matter. “An internal process was undertaken and it found that the decision to advertise the proposed sale happened in 2015. “I was also advised that an error was made on a departmental computer being used by a staff member.” Mr Toole said the sale was also advertised in a local Central Coast newspaper (not the Peninsula News) in August 2013 so he did not believe the placement of the advertisement in a Batemans BayMoruya paper invalidated the sale.

“The internal review that I asked to be undertaken confirmed that,” he said. “The information that came to light goes some way to ensuring that we can continue to improve our processes.” Mr Reynolds was then called upon by the Minister to provide more information. “Within three hours of the ABC [TV news] report, I sent an email request to my independent governance team,” Mr Reynolds said. “The team exists within Crown Lands and it is independent of the area associated with the sale,” he said. “I set the scope of the review directly from my office and sent the email to the director who heads that area. “The review was completed within two weeks and it was very thorough. “As the Minister confirmed, the review concluded that an advertisement was placed in 2013.

“My interpretation of the evidence trail attached to the internal review document was that the department took a conservative approach with regard to the time that had lapsed between 2013 and the advertisement being appropriately placed and the sale concluding in 2015. “As I said, my review indicates that the department felt that was long enough to seek to renotify. “The documents confirm that the officer involved at the time had inadvertently ticked the “Bay Post” thinking it was the relevant bay. “In fact, it was the Bay PostMoruya Examiner; that was in fact the second notification, the appropriate notification was placed earlier in 2013.” Speaking after the committee session, Mr Veitch said he believed the information given about the sale price of the land was “inconclusive”. “I will be asking more questions,” Mr Veitch said.

Markets to make a pre-Christmas come back

Remembrance Day service to be held at Woy Woy and Ettalong