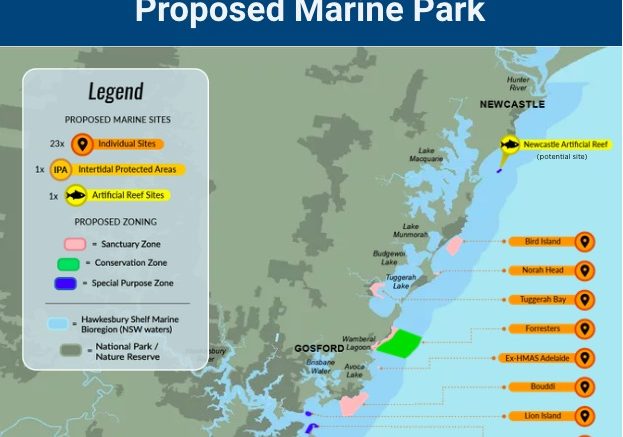 Map of proposed marine park off the Central Coast

The NSW Government’s proposal for a marine park includes a network of 25 distinct sites, three of which fall within the greater Gosford area, off Forresters Beach, the ex-HMAS Adelaide dive site off Avoca, and Bouddi.

Other sites on the Central Coast are Bird Island, Norah Head, Tuggerah Bay and Lion Island. Of those, the Forresters site is a combination of sanctuary zone and conservation zone.

The ex-HMAS Adelaide and Bouddi sites are sanctuary zones under the proposal.

According to the NSW Marine Estate website, the proposed Forresters site would be located between Bateau Bay and Wamberal Lagoon. It would include Crackneck Point, the rocky shores adjacent to Wyrrabalong Nature Reserve, Forresters Beach and Wamberal Beach. It extends seaward to the three-nautical-mile limit of state waters. The proposal is a large site, covering a total of 3,430 hectares.

This consists of a 586 hectare sanctuary zone along the shoreline, from the southern end of Bateau Bay, south to the entrance to Wamberal Lagoon (and the lagoon itself), and seaward to the 20 metre depth contour. Further seaward of this, it is proposed to establish a 2,844 hectare conservation zone, extending from the 20 metre depth contour out to three nautical miles. The primary objectives for the proposed Forresters Marine Park site included to: enhance the conservation of marine biodiversity; enhance intrinsic benefits derived by the community from the marine estate; enhance bequest values for current and future generations; reduce conflicts between users of the marine estate, and provide baseline scientific reference sites. All extractive activities would be prohibited in the proposed sanctuary zone except for research and Aboriginal cultural use. In the proposed conservation zone, all fishing would be prohibited except for lobster and abalone fishing, and Aboriginal cultural use.

The nine-hectare ex-HMAS Adelaide site is currently managed by way of a Crown Reserve, and fishing activities are prohibited under several fisheries management regulations. It is proposed to transfer management of this area from a Fishing Closure to a Sanctuary Zone, to reduce legislation volume and complexity in the bioregion, according to the NSW Marine Estate website. No changes to management rules or closure boundaries are proposed. The touted Bouddi marine park site is on the northern shore of Broken Bay, adjacent to Bouddi National Park, and is an expansion of the existing Bouddi National Park Marine Extension.

The proposed expansion would cover the shoreline from the southern headland of Little Beach, south-west along the shoreline to Gerrin Point, and seaward to include an area of 1,484 hectares. It would include deep rocky reefs as part of a continuous reef system, extending from the shoreline to depths of around 40 metres. The existing protected area, including the 252 hectare marine extension between Gerrin Point and Third Point, is managed as part of Bouddi National Park.

All types of fishing are prohibited by a time-limited fishing closure under the Fisheries Management Act 1994. According to the NSW Government’s site-specific information about the Bouddi site for the marine park, the removal of, or harm to, marine life and habitats would be prohibited, including fishing by any method, and hand gathering and collecting marine organisms throughout the proposed Bouddi site. “These restrictions would provide comprehensive protection for fish assemblages, marine vegetation and threatened and protected marine species. “The proposal would help to maintain the area’s value as a scientific reference site. “Activities that are minimal– low risk, such as swimming, snorkelling, diving, recreational boating and Aboriginal cultural use would continue.”