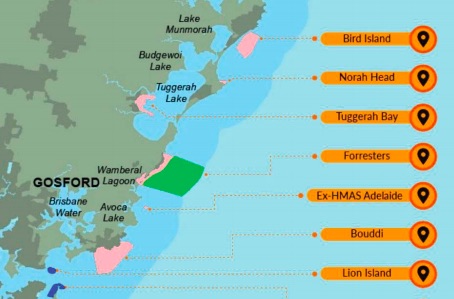 The Central Coast zones designated as part of the Marine Park

Member for Terrigal, Adam Crouch, said he was “delighted” when NSW Minister for Primary Industries, Niall Blair, announced on Monday, September 17, that there would be no loss of fishing rights under the Marine Park proposal.

The Greens and the local Community Environment Network have, however, condemned the decision. “I am delighted that, as a result of my advocacy on behalf of our local recreational and commercial fishers, the Minister understands and accepts the significant social and economic impact the proposal would have had on the Central Coast,” Crouch said. “As the Minister said earlier today, the message coming out of the public consultation is clear that fishing is not a significant risk to our marine environment,” Crouch said. “Any threats can be managed without locking out people from fishing on our beaches and local waterways,” he said. “Since the proposal was published, I have been openly opposing it as too extreme, and putting the case forward on behalf of our community. “As a strong local voice in Government, our community has had a very positive outcome.” “I also take this opportunity to thank all local fishers, including, Scott Thorrington, Alex Hamilton, Nathan Bajada, Paul Marsh and Simon Horvath, for constructive engagement and persistent advocacy.

“Meanwhile, Labor have remained strangely quiet on this issue, especially on the Central Coast. “Now is the time to continue this vital process of working towards a balanced outcome that best suits the needs of the unique Central Coast lifestyle and economy.” Minister Blair said the NSW Government had committed that there would be no loss of fishing rights or access under the proposed marine park sites put forward by the NSW Marine Estate Management Authority (MEMA). Blair said he had received extensive feedback from both local communities and anglers and was confident that fishing was not the key threat to the sustainability of the marine environment. “The feedback we have received has been robust but vital to being able to make this decision today,” Blair said. “While consultation will continue, I felt it was paramount to allay the uncertainty and fear the fishing industry is currently experiencing,” he said.

“I am a keen fisherman myself and understand both the economic and social values the industry brings to our state. “MEMA put forward this proposal because they had identified 25 areas that require better management to ensure their sustainability. “What is now clear is that their proposed management methods and in some cases the sizes of the sites, offered up a narrow option that unfairly impacted on low risk activities, such as fishing and spear-fishing. “As a result the NSW Government has taken lockouts off the table. “We are confident there are many other ways to manage these sensitive areas, that have fishers as part of the solution and we will continue to explore these options for the rest of the consultation period. “Today’s decision does not change the fact we are still working towards a marine park that protects key marine habitats, species and the environment we all know and love. “Adam Crouch has been a very strong voice within Government on this issue. “I have had many conversations with him over the past few weeks about how the proposed marine parks would affect his local area. “His fierce advocacy on behalf of the Central Coast fishing community has been heard and we will not be locking out fishers.

“I look forward to continuing the collaborative work between Adam Crouch, local DPI staff and local fishers on the Central Coast.” “The Greens condemn the decision by the Berejiklian Government to walk away from an effective marine park for Sydney and surrounds,” Greens MP Justin Shield said. “This is an anti-environment, anti-science Government, which has shown that they will always pander to vested interests over the best interests of the entire community,” he said. “A majority of the community backs protecting our marine environment and coastline, and this proposal for a network of protected areas, including marine sanctuaries, would help deliver healthy oceans and fish for the future. “To walk away from the marine network plan before the consultation process even concluded is a massive breach of community trust. “There has been a concerted effort by vested political, industry and media interests to pressure Liberal/National MPs in marginal seats, and it is disappointing that the Government has allowed these interests to undermine democracy and the consultation process in this way. “Marine sanctuaries are vital for an effective marine protected network, they are an important part of ensuring healthy oceans for the future. “These sanctuaries are scientifically proven to increase the diversity, abundance and biomass of marine life. “Fully protected marine sanctuaries are a critical component to any marine park planning. “Today’s announcement that sanctuaries will not be considered in the plan, means that it will not be a marine park. “Any suggestion otherwise is just spin.

“The cowardice shown by the Government in walking away from an effective Sydney Marine Park sets a disturbing, undemocratic precedent and will not be forgotten. “This backflip increases the likelihood of MPs in marginal seats being targeted again and again by narrow vested interests in the lead-up to the State election. Other conservation groups condemned the NSW Government’s unilateral decision to strip environmental protections from its proposed Sydney Marine Park before the public consultation period has closed. “This decision undermines public confidence in the Government’s consultation process, which still has 10 days to run,” Nature Conservation Council CEO, Kate Smolski, said. “By caving into a noisy minority of voices and pre-empting the results of the public consultation, the government has denied thousands of people a say in the protection of our precious marine life. “It is a slap in the face for the vast majority of people who say they want increased protections for our ocean waters and marine life.

“This is a betrayal of public trust that may cost the Berejiklian government dearly at the next election, as people on the coast oppose scrapping the sanctuary areas. “Polling last month showed that if the government backflipped on Sydney Marine Park, many people in key coastal electorates would vote against the Coalition.” NSW marine parks are multipleuse and allow a range of activities, including recreational fishing, commercial fishing, boating, diving, snorkelling and swimming across the region. The activities allowed are determined by zoning arrangements developed through community consultation. When the marine park for the Sydney region is fully established, NSW will have seven coastal and offshore marine parks in total. The Sydney Marine Park campaign is a joint project of the Australian Marine Conservation Society and the Nature Conservation Council of NSW.