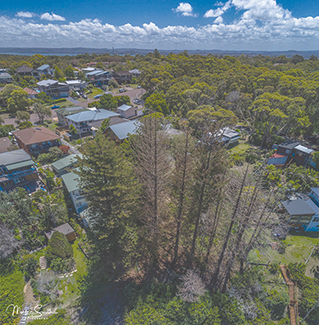 The Peninsula is one of the worst “heat sinks” on the Central Coast, it has been claimed.

“The Peninsula is noticeably hotter than other areas because of its lack of trees,” according to Cr Richard Mehrtens who has been working on the development of an Urban Forest Policy.

“We very much run the risk of creating even more heat sinks with this undeterred development and lack of green space we are looking at,” he said. Cr Mehrtens has successfully moved a motion for Central Coast Council to reinstate the former Gosford Council’s policy of providing free trees to residents upon request. Councillors also resolved to work towards developing a more substantial urban forest policy.

“Even a number of metropolitan councils in Sydney have urban forest policies and are doing really good work in making sure their tree canopy is not being reduced through development and that developers are following through and replacing trees. “We are falling behind especially when we rely on private certifiers who are ticking off developments without replacing trees,” he said.

“I was recently shown an aerial shot of a site with four houses with nine big canopy trees. “There was then a photo of the finished development on the four consolidated blocks with not a single tree. “This is the reality of this unrelenting drive to fill in every space we can with residents.”