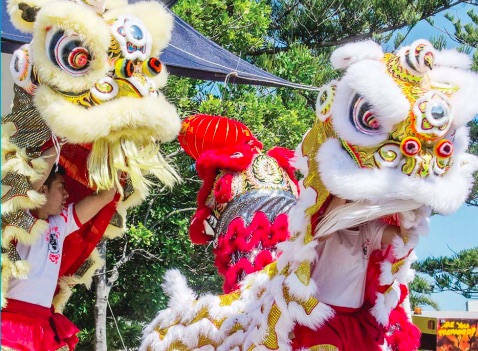 The Central Coast celebrated the Chinese Cultural and Moon Festival at The Entrance on September 16.

One of the largest multicultural festivals on the Coast, the Chinese Cultural and Moon Festival treated local families to a traditional Chinese treat, moon cake. Now in its eighth year, Festival Organiser, Ruby Eaton, said eight is the lucky number in China, and that festival goers were especially lucky this year, with a range of extra special acts appearing at the Festival. “Our Chinese host city this year was Langfang, and they brought their famous Flying Forks King Fu to Australia for the very first time. “Other performers from Langfang include kite fighting, traditional ancient musical instruments and kung fu displays,” Eaton said. Langfang is a second tier city of 4.5 million people about halfway between Beijing and Tianjin. In addition to moon cake tasting, there was also tea sampling. The event started with a lion dance roaming up and down The Entrance Rd and finished with pelican feeding for families at the end of the day. “Zhong Qiu Jie Kuai Le,” said Eaton, meaning “happy Moon Festival.”

Work on The Entrance Channel continues