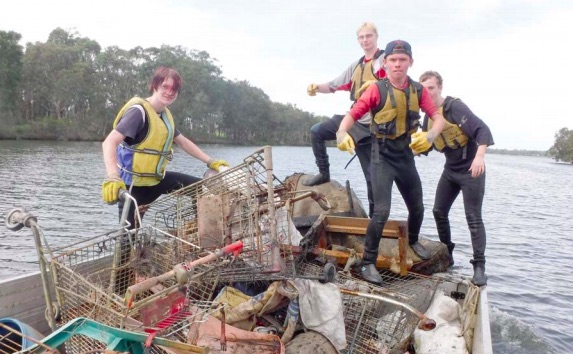 Local organisation Clean4Shore has received a nomination in the National Landcare Awards, for removing 56.9 tonnes of litter from Brisbane Water and the Hawkesbury River.

The program encourages school, youth and community organisation to “join the battle” in reducing litter, especially plastic and polystyrene from our local waterways. Seventy-six field trips were completed by 424 volunteers, collecting 106,636 pieces of litter in the past year. “The volume of litter is decreasing,” according to program coordinator Mr Graham “Jono” Johnston. He said that, despite the fact that 14,888 plastic bottles, 14,566 pieces of polystyrene and 18,575 pieces of plastic were collected, the numbers were all down on the previous year.

“Government policies, especially the return and earn program, together with improved community awareness within the schools, and positive media have also greatly reduced the volume,” he said. Funding from the Federal Government and support from Central Coast Council had “provided stability and structure” for the program, allowing schools to plan field trips and build educational outcomes from the data collected from each outing, he said.