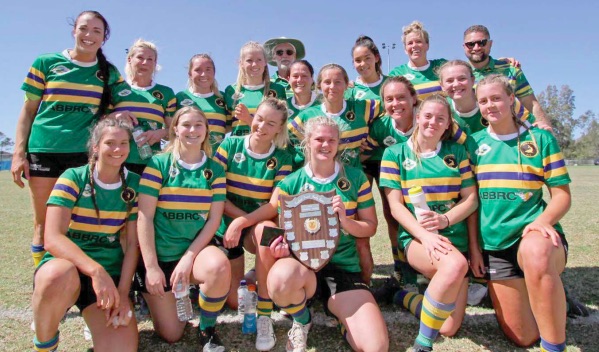 Avoca Beach teams have blitzed the 2018 Central Coast Rugby Union Grand Finals, with their Women’s 7’s team and Under 19’s team both being crowned Premiers.

The grand finals were played at Woy Woy Oval on Saturday, September 15. In the Women’s 7’s final, they defeated Minor Premiers Woy Woy, by 17 points to 7. Avoca Beach went to the halftime break leading by 10 points to nil, and had all but secured the Premiership, even at that stage. Avoca Beach crossed for a third try early in the second half and they then led by 17 points to 0. Woy Woy did score a converted try, but it was far too late. Best players for Avoca Beach were, Jessie Jensen, Inge Visser and Renee Staben.

The win is Avoca Beach’s first in the Women’s 7’s Premiership in Central Coast Rugby since the Sharks won the 15 a side title in 2002. It was Avoca versus Woy Woy again in the Under 19’s decider, and neither team was prepared to give the other any quarter. It was an intense, spirited contest in the first half, but it was Avoca Beach who gradually gained control the further the first half progressed. Avoca Beach had jumped to a 10 to nil lead at the halftime break and everything appeared to be going their way, but Woy Woy were not going to just roll over and concede the Premiership and responded with their own converted try early in the second half. Suddenly things were even more intense, with the score now 10 to 7 in favour of Avoca Beach. Despite Woy Woy’s resurgence, Avoca Beach held their momentum, posting 13 points in the final 20 minutes of the second half to lock down the 2019 Under 19’s Premiership, with a final score of 23 to 7. 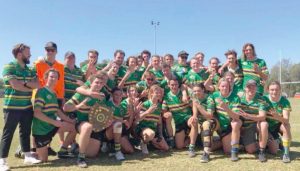 Avoca Beach’s Under 19’s with their silverware for 2018

Best for Avoca Beach on the day were fullback, Reece Piepers, lock, Matt Peebles, halfback, Kye Blair and centre, Michael Houssenloge. It was the third successive Premiership in this grade for Avoca Beach, who were able to cap off some excellent late season form with this win. Gosford also made their way into the grand final of the Premier 2 division, but were denied the 2018 title after a hard-fought battle with The Lakes. This encounter was an intense affair from start to finish. The lead in the match chopped and changed right through to the very final stage of the second half. The Lakes got away to the better start, and with a penalty goal and a converted try, had jumped to a handy 10 points to nil lead midway through the first half. Gosford got themselves right back into the match before halftime with a converted try, and at the break, it was The Lakes leading by 10 points to 7.

The start of second half saw Gosford gain the ascendancy, and with a penalty goal and a penalty try, had raced to a 17 points to 10 lead. It was proving such an intense contest and with the hot conditions, both teams were feeling the strain. The Lakes responded with two quick tries, while Gosford kicked a penalty goal, and suddenly the scores were locked at 20 points apiece with time running out. Both teams knew they could afford no error as the clock wound down, but sadly for Gosford, The Lakes were awarded a penalty kick in the final minutes of play which saw the northern team snatch the victory 23 points to 20, right as the fulltime whistle blew. Best for Gosford were lock, Wes Bull, No.8, Andrew Moseley, and flanker, Richie Cully.