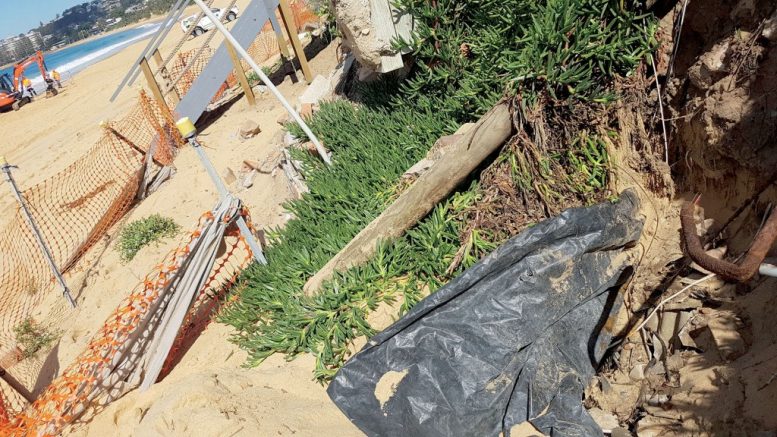 Central Coast Council has confirmed it was digging test pits and undertaking air quality monitoring along Terrigal and Wamberal Beach with expert assistance on Wednesday, August 29.

Council Unit Manager of Natural and Environmental Assets, Luke Sulkowski, said Council was continuing its action plan for the beach to confirm and provide confidence to the community in the safety of the beach.
Member of the NSW Legislative Council, Taylor Martin, said he had seen an excavator on his morning walk along the beach, and had then returned to seek more information about the activities.
Speaking to Coast Community News from the beach, Martin said: “I am literally standing next to half a dozen pieces of asbestos on the public beach and Central Coast Council continues to argue this problem is not on public land.
“The boundary is disputed, but in any case, there is exposed asbestos.
“If this was in someone’s front yard next to the road, a Council ranger would make sure something was done,” he said.
“It would be called dumped asbestos, so why is it any different when it is not next to a road but next to a public beach?
“I do not understand why I am looking at dry, broken, exposed and publicly accessible pieces that are on the beach, and the Council is saying it is not their problem.
“These pieces have been washed up and down our beach since they were exposed two years ago in the East Coast low.
“This is the source of the problem, and it has been the source of the problem for years.
“I and residents are calling for action.
“We just want the Council to do its job.
“They have the resources, they know where it is.
“What makes it even more bizarre is that we are currently having this debate on sea level rise and erosion and this is something that Council could do right now.
“A lot of this for me is due to my own family experience; that is what is driving me.
“I know everyone has a link, the Central Coast is a very small place, it is a working class area, and everyone has a story about how lethal asbestos is.
“It killed my grandfather and it killed former Gosford Deputy Mayor, Bob Ward,” he said.

Pat Aiken, Secretary of Coastal Residents Association, was also on Wamberal Beach on the morning of Wednesday, July 29.
He said he asked the excavator operator what work was being done.
“They said they were digging holes to look for legacy dumping of asbestos.”
Aiken said he pointed to an area on the street side of mesh fencing that had been erected by Council, and told the excavator operator that there was asbestos buried behind the fencing.
“I took an armful of asbestos over to them.
“The man said put it down on the ground.
“I was told to put it down beside the vehicle so they could spray it and bag it.
“I guess they have been given instructions not to go near it.”
Mr Aiken said he again reported the exposed asbestos to the EPA.
“I want to assure the community, the risk to public health is still considered, by experts, to be low due to the size and nature of the material and that it is in bonded form,” Mr Sulkowski said.

“Council has started these additional works to be extra vigilant in our commitment to remove potential asbestos containing material from the beaches.
“There are excavators and environmental specialists at the beach doing the testing and monitoring identified within the risk management plan to best avoid any potential escalation in risk from the current identified low-risk situation.
“Council is not digging up the whole beach by any means and the beaches continue to remain open and safe for all to enjoy.
“It is unfortunate that again Council and the community are being left to manage the on-going issues of this material being washed up or dumped in our environment.
“The community must help in this fight.
“Please exercise caution at all times, always report unknown material to Council or the Environment Protection Authority on 131 555 so it can be removed.
“Contact authorities if you know this material has been dumped, there are heavy penalties for those who are caught dumping asbestos containing material as there should be.
“The community can be assured this is a key priority of Council and we will continue to be vigilant and will take all necessary precaution and action in the interests of community safety.”
Council will continue daily inspections and monitoring of the beach and assess the results with advice from expert consultants with regard to future management of asbestos risk on the beaches.
Council will continue to update the community accordingly as further information from the current monitoring program becomes available.

The Risk Management Plan has been developed by expert consultants following a number of site inspections and analysis of sample material collected, who have identified the risk to human health as low, according to Council.
Consultants have recommended continued and further monitoring by staff.
Closure of or restricting access to the beach has not been recommended.
Council will continue with daily inspections by trained staff using appropriate protective equipment and collection techniques to match the low level risk presented by the material.
Sulkowski said he understood and acknowledged community concern about asbestos containing material.
“The risk to public health is considered low due to the size and nature of the material and that it is bonded in sheet form.
“Asbestos is dangerous only when broken up and fibres are released into the air.
“It is not necessary at this time to close the beach, as the material is being removed daily or as it is reported to Council.
“Council is following best industry practice and undertaking what is called an ‘emu pick’ on the surface of the sand, as the material is mostly being washed up when there are high tides.
“To dig up the entire beach would be impractical and would require the closure of the beach for several months, and would not necessarily deal with the concerns.
“Although the Plan has identified that the risk to human health is low, Council will continue to be vigilant and undertake further monitoring and assessment of the situation, including deploying air quality monitoring equipment.

“We really don’t know exactly where the material is coming from at this stage, but we believe that it is being washed onto the beach from offshore during high tides.
“Council will continue to work with experts and government agencies to address the matter.”