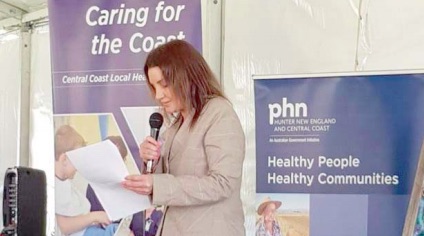 The Glen Rehabilitation Centre at Chittaway, celebrated Women’s Health Week on Friday, September 7, to highlight the need for an Aboriginal Community Controlled and culturally appropriate Women’s Healing Centre, along the same lines as The Glen.

Guest speakers included Linda Burney, the Federal Shadow Minister for the Prevention of Family Violence, which had just been elevated to a cabinet post. Burney announced she had just been promoted to Shadow Minister for Family and Social Services to replace the retiring, Jenny Macklin. “If we are afforded the opportunity to form government, that will make an Aboriginal woman one of the most senior people in the Australian Government,” she said.

Burney spoke of the “realness” of her own life experiences, including believing, as a child, that Vegemite soup, was a special treat. “Water and vegemite, how is that a meal?” she said. She said she gave her “absolute support’ to the development of a service like The Glen for women. Burney said The Glen was an incredibly special place “and it is special for lots of reasons.

“The work of this organisation is absolutely essential, not only to the lives of the young men standing up the back today, but to the lives of the thousands and thousands of young men, and we want the same thing for our women,” she said. The event highlighted the triumphs and struggles of women as they shared their stories of health issues in an open and honest forum.

After the women’s health forum, all guests were invited to the ‘Official Opening of The Glen’s Beach Volleyball Court’. A celebrity game included local politicians and identities, followed by a small tournament open for public participation. The Glen Chairperson, Coral Hennessy, noted the great opportunity for the event to educate and bring awareness about Women’s Health issues on the Central Coast.

“Women’s Health is everyone’s business,” Hennessy said. “We need our women to support each other and we also need our men to support our women. “The Glen is a male only service which has been governed by an all female board for over five years now.”

Glen residents to exhibit at the Saltwater Freshwater Art Exhibition

The Glen for women approved