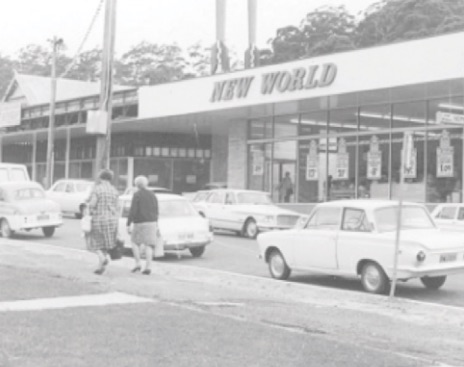 The Donnison St side of the site in 1967

Cost estimates have been obtained, but not disclosed to the public, to provide a total project cost for the cultural precinct to be built in the Gosford CBD.

The financial benefits of the project have been outlined in the open staff report. In a separate agenda item for the Central Coast Council meeting of September 24, Councillors moved into confidential to discuss priority projects that could be earmarked for NSW Government money under the Snowy Hydro legacy fund. The agenda item was published for six days online as part of the main business papers but then removed as the item was to be discussed in a confidential session. Coast Community News has obtained a copy of the item as it was published on Council’s website. It estimated the total cost of the cultural precinct at $150 million with the potential to create 700 jobs but an unknown timeframe for completion.

Council considered the item in confidential but noted that the outcome was that the Central Coast Regional Leadership Executive Group, responsible for putting projects forward for the Snowy Hydro funding, had included the cultural precinct as one of its priority projects. Council was working with the group and regional stakeholders to develop preliminary business cases for the top three projects to request funding for scoping studies to inform a detailed business case for each of the short listed projects. Any application for scoping studies would include provision for project management to reduce the financial impact on Council of the preparation of detailed business cases. Meanwhile, Central Coast Council staff have included the cost of construction and contingencies, consultants, statutory authority fees, and land acquisition in their preliminary projections. A total of $45,735,000 is within reach from a variety of sources, including the $10m pledged from the Federal Government for the RPAC, $8m from the NSW Government, and another $7m from the Federal Government for the library, plus the $10m committed by Central Coast Council. Council has committed another $635,000 for RPAC project management.

According to the staff report, there is $8.1m in Council coffers collected from Gosford ratepayers as a library levy. The staff report then outlines another potential $22,203,070 in additional funding that could come from the sale of the Kibbleplex building, at 136- 146 Donnison St ($12.6m) and around $9.6m in developer contributions paid to the former Gosford Council. That provides total potential funding figure of $67,938,070, but the staff report implies the total cost of the project would be greater than that figure. “The remaining capital requirements of the project would need to be met by Council” the staff report said, pointing to a confidential attachment for more information.

Another unknown cost is that of the Planning Minister’s approval, which could be required if the Gosford City Centre State Environmental Planning Policy (SEPP) is put in place, requiring Ministerial approval for developments worth over $75m. According to the latest staff report on the regional library and RPAC, “a formal market sounding process is required to ascertain the true current demand for commercial space within the Gosford CBD. “A certain level of commercial pre-commitment would be required prior to commencement of construction. “Council officers have carried out extensive research on the commercial offi ce market and it is demonstrated that there is a lower commercial office supply on the Central Coast when compared with other regional cities such as Wollongong and Newcastle.

“Information provided at the councillor briefings and within the confidential attachments demonstrates that the market rental and the sale analysis per square metre is realistic and competitive with other comparable assets and markets,” the staff report said. “Council staff have progressed required discussion and investigation for the acquisition of the properties required to achieve a Cultural Precinct. “Owners of the properties are agreeable to the acquisition of their properties by Central Coast Council for the purposes of the project and formal valuations are complete in addition to the high-level desktop valuations already undertaken.” The valuations will help inform future negotiations with property owners, but the actual costs of property acquisitions are unknown and changeable.

On the other side of the ledger, the project has been estimated to generate 1,471 full-time equivalent jobs as a result of “direct, indirect and consumption related activity”. “The construction phase of the project would also generate an estimated $137m of added value for the Central Coast economy,” according to estimates from a consultant. “Once construction is complete and all elements of the Cultural Precinct are operating, it is estimated that 645 additional full-time equivalent jobs and $50.6m of additional value would be added to the Central Coast economy annually, again from direct, indirect and consumption related activity.” Staff have recommended that Councillors progress to Hold Point 1, which would get the project to the stage where it was ready to submit a DA and would “provide Council with more accurate cost estimates.

Funds required in the present financial year would be $4.3m to progress the project to detailed design for DA submission. “Cost estimates aim to take into account all possible scenarios, however, until the market is tested through a formalised tender process, the final cost of construction may move from its present position. “Current contingencies make allowance for as many unknowns as possible, but until construction commences, some elements will remain unidentified (such as presence of contaminated fill). “If the project is delayed for whatever reason, it is reasonable to assume there would be an element of cost escalation, which generally sits around 3-4 per cent annually. “Existing grant funding commitments are at risk due to projected delivery timelines. “Funds from both the State and Federal Governments are commitments only and have not presently been paid to Council. “The original funding commitment required both projects to be completed by 2020, which is unlikely.”