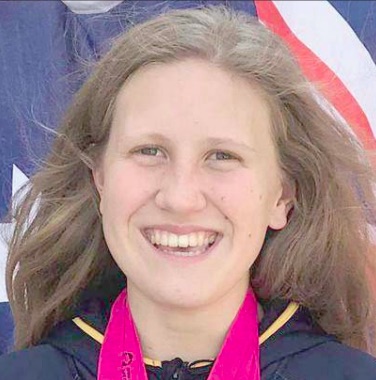 Tahlia Blanshard has returned home from Barcelona, with four medals

The 18-year-old has been a long time member of both the Woy Woy Pirates and Mingara Recreation Swim Clubs. Tahlia is affected by cerebral palsy on the left side of her body and was just one of five athletes to represent Australia at the Games. Tahlia was the only Australian team representative competing in the para-swimming. She took out the gold in the S9 100m Freestyle, Butterfly and Backstroke and a silver in the 50m Freestyle. Prior to her World Games selection, Tahlia was well into a Health Science Degree with the Australian College of Physical Education, was coaching a local netball team or travelling to the Peninsula Leisure Centre where she trains in the pool six days a week. Also an avid dancer, Tahlia splits her time between the pool and the studio as much as she can.

“My goals for the Games were to set loads of new personal bests, win a medal and make lots of friends from other countries, so it’s pretty special to be coming home with four medals,” Tahlia said. Tahlia is now focusing her efforts on her next event the Australian Short Course Nationals, coming up this October. She will face a more diverse field of competitors at the Nationals, as a range of Para-athletes are set to hit the pool, as opposed to the World Games which only featured athletes with Cerebral Palsy. Should Tahlia perform well at the Nationals she will be one step closer to achieving her ultimate goal of representing Australia in the Paralympics and to break a Butterfly world record.