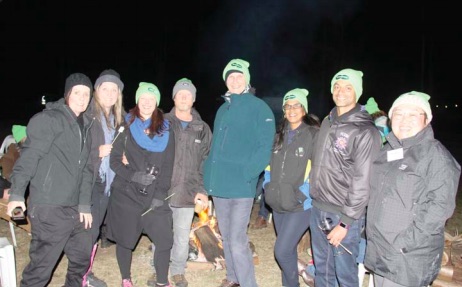 Over 50 executives, business owners and their staff, swapped their beds for sleeping bags on Friday, August 10, as part of Coast Shelter’s Million Star Executive Sleepout.

Held at Glenworth Valley Outdoor Adventure Park, the sleepout is an annual event which coincides with national Homelessness Week (August 6-12). “It is a really positive event that brings in a lot of funds to Coast Shelter each year,” said Coast Shelter’s, Rachel Willis. Over $57,000 in funds was raised, with each sleeper raising $1,000 dollars each. According to Willis, the money raised will be going towards the Community Centre and its kitchen, Laurie’s Table, which provides free meals for the homeless. “The funds raised from the event will be able to provide 50,000 of these meals,” said Willis.

The sleepout involved activities such as team building exercises and a panel discussion about homelessness. Former MasterChef winner, Julie Goodwin, also made her annual visit to cook for the event. “There were client stories from young people who had received services from Coast Shelter, and Star FM sent out some performers for entertainment, which was also great,” said Willis. “Overall, it was a really good turnout with lots of people involved,” she said. Among those sleeping rough as part of the fundraiser, was Central Coast Council CEO, Gary Murphy, and his team, as well as the Federal Member for Dobell, Emma McBride. McBride said it was no secret that homelessness had become a huge concern on the Central Coast.

“We have pockets in our community, around Wyong and Gosford, where homelessness is twice the state average. “This is something that demands our urgent attention. “Our young people are particularly vulnerable,” she said. The 2016 Census showed that there were 1,000 people who were homeless on the Coast. This shows that the number of homeless people has increased by a third since 2011. This is the eighth year that Coast Shelter has successfully held the sleep out, and the shelter will continue to assist this growing homeless community through such initiatives.