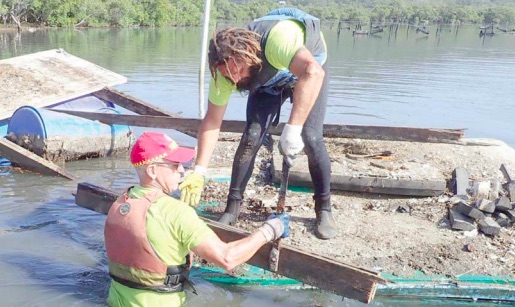 A report from local clean-up organisation Clean4Shore has identified debris from derelict oyster farms as a major pollutant in Brisbane Water.

Removal of the debris represents much of the voluntary effort that Clean4Shore coordinates and represents a significant cost to the community in its disposal, according to the 2017 program report released last week. “Derelict oyster infrastructure, abandoned by owners, washes off the lease with storms, or simply degrades due to neglect,” said coordinator Mr Graham Johnston. “The number of abandoned leases is increasing as the industry struggles with viruses and a lack of operating space.”

Students from Brisbane Water Secondary College are major contributors to the Clean4Shore program.

They monitored and cleaned rubbish from Peninsula waterways, including at Pelican Island, Empire Bay, Riley’s Island, Woy Woy Channel, Woy Woy Creek, Phegans Bay, Wagstaffe and Woy Woy Bay, he said. “All field trips in Brisbane Water return with an oyster product,” Mr Johnston said. The college was named the Regional Landcare Schools winner of the Greater Sydney Local Landcare awards for 2017, having removed 18.5 tonnes of rubbish in the 2016-17 period.

Cleaning up for tourist season

Deal of the century does nothing for local community