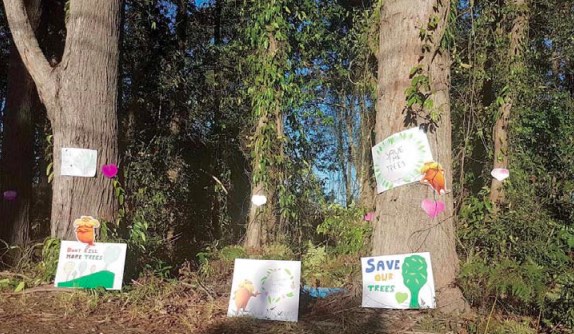 Transport for NSW has announced that the section of road connecting Orchard Rd to its New Intercity Fleet rail maintenance facility site at Kangy Angy, is proposed to be re-classified to retain vegetation.

Parliamentary Secretary for the Central Coast, Scot MacDonald, said he was pleased an outcome had been reached, in response to community feedback, that will no longer see the remaining trees cleared, “I acknowledge the considerable concern raised by community members about tree removal during early construction,” MacDonald said. “Transport for NSW has assured me that it is their commitment to deliver infrastructure while minimising impact to residents and the environment,” he said. “I am pleased to confirm that Transport for NSW, their contractor John Holland, and Central Coast Council, met to explore options to quickly resolve residents’ concerns, and have reached a positive outcome.

“The road that connects the facility to Orchard Rd is proposed to be reclassified by Council as a rural road. “Previously this was planned to be an industrial road. “Re-classifying it means design adjustments can now be made. “In particular, reducing the width and footprint needed to build the road, so there is no longer a need to clear the additional trees. “The access road will now be a similar width to Orchard Rd. “It will have a spray seal, with no kerb or guttering, or lighting.” Transport for NSW and Central Coast Council will continue to refine the design of the Orchard Rd intersection, and this will be shared with the community, once finalised. Central Coast Council Mayor, Jane Smith, said she welcomed the collaboration between Council and Transport for NSW, which will see 49 mature trees retained at Kangy Angy around the proposed new access road to Orchard Rd.

Local residents have been calling for a change to the plans to save the trees, and this has been achieved, Smith said. She said she was pleased residents’ concerns had been listened to and praised staff for their efforts in negotiating the right outcome for the community. “Council Directors, Boris Bolgoff, Scott Cox and their teams, must be congratulated and thanked for their strong leadership in making this happen. “This is what true collaboration is, two levels of government working together with the community’s best interest at heart. “Council commend the community for their vigilance and support in helping us keep our natural environment protected for us and for future generations.”

Elaine Johnson, Principal Defender for the NSW Environmental Defenders’ Office, said the residents were “very pleased” that Transport for NSW had determined not to remove to trees. “This is a good outcome for the environment and community, and reflects well on TfNSW, as a Government agency having listened to, considered and responded to the concerns raised,” Johnson said. Member for The Entrance, David Mehan, also said it was a positive outcome for the community and the environment.

Mehan said he wrote to the Transport Minister and Council on July 27 after attending the protest, asking that clearing be halted and the design of the proposed access road be reviewed. ‘I want to commend the community and the Kangy Angy Residents Action Group for their vigilance,” he said. “I also want to acknowledge and thank Council staff on the way they engaged with TfNSW on the re-design of the access road.”