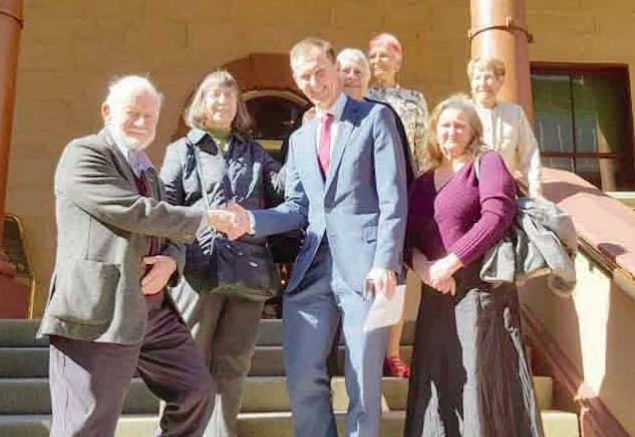 David Mehan, Member for The Entrance, with Kangy Angy residents, during the campaign to stop the rail facility

Member for The Entrance, David Mehan, read a statement from the Kangy Angy Residents Action Group (KARAG) in the NSW Legislative Assembly on August 7, which included damning information about the role of the former Wyong Council in pushing the NSW Government towards building its facility at Kangy Angy, instead of Warnervale.

“When Premier Berejiklian was Transport Minister, she shook hands on a deal with the Darkinjung Land Council, to site a new Rail Maintenance Facility at Warnervale,” Mehan told parliament. “For unknown reasons, Transport decided not to pursue this avenue. “A list of over 20 sites was established, whittled down to eight, with (Darkinjung land at) Warnervale being the now preferred site. “Warnervale fitted the criteria laid out for the proposal, Kangy Angy not even appearing on the list. “We have documentary evidence that threats were made to Transport if they pursued the prefferd Warnervale option.

“We hasten to add this was the previous Council before amalgamation with Gosford.” KARAG has obtained copies of correspondence by the former General Manager of Wyong Council, Michael Whittaker, to Transport for NSW, on October 9, 2014. The email was copied to then Mayor of Wyong, Doug Eaton. Whittaker said: Transport for NSW’s preferred site at Warnervale had “for many years been identified by Council for the construction of the Link Road and development of an education and business precinct.” The email said: The proposed TfNSW site for the rails tabling and maintenance yard has completely unacceptable implications on both of these strategic initiatives by Council.

“Wyong Council would like to convey in the strongest possible terms its complete opposition to the TfNSW proposal for this facility on this site. “I also advise that Council will be taking action to initiate opposition to this proposal at a political level,” Whittaker said. According to David Mehan’s parliamentary statement: “Instead of continuing down the list of possible sites, Transport asked Wyong Council for their recommendations. “Wyong proffered the Kangy location, and without any onsite investigations into its suitability, Transport purchased what can only be called a lemon, in developmental terms. “Transport failed to learn that the land was valued at $422,000, and purchased it for $17m.

“Transport, without checking, accepted flood mapping from Wyong Council that was blatantly inaccurate, and recommendations that this parcel of land did not flood and was fit for purpose. “The usual practice of submissions from residents was solicited, and for nearly three years, we have been informing Transport that the land is not fit for purpose.

“Indeed of the myriad of issues, Transport’s arguments have not stood up to scrutiny once. “This confirms the lack of expertise in design, engineering and technical know-how within the department. “Even now, as the protected trees have been cleared, there is still only an artist’s impression of the plans, and the response to other issues is that ‘we will deal with them as they arise’. “To say that the proposals are fluid, is an understatement. “Our arguments have been based on a comparison with Warnervale. “Our submission shows that Transport massaged the figures to produce the results they wanted.

“They continually assert that Kangy Angy was the preferred site over Warnervale. “We can prove comprehensively this is not the case. “On every single issue, Warnervale is the superior site, less that 10km further North, and Central Coast Council endorsed. “Kangy needs a $50m bridge and extensive road works to access the site, while Warnervale does not. “Kangy floods regularly, causing road closures, it is a wetland and water storage floodplain, while Warnervale does not flood.

“Kangy’s position means slow-moving trains enter and exit a busy 80kph main line, endangering workers, lives where no such problem exists at Warnervale. “The parameters placed on the site by Federal Minister Josh Frydenberg are onerous: 3,984 Melaleuca Biconvexa, Mahony’s toadlet, Wallum froglet, habitat for endangered birds exist on this E2 and E3 zoned land. “Warnervale is zoned industrial with no ecological issues. “Do we now have to discover a political reason for Transport’s intransigence, because the political fallout from this proposal will be considerable at election time?

“At this point the residents concede defeat. “The trees are gone. “We won all the arguments but that was not enough. “We were up against an adversary that didn’t play fair. “The playing field was never level, and the odds always stacked against us. “We the little people had no knock-out punch, even though we have right on our side. “In the battle for Kangy Angy, David has not slain Goliath, the cavalry did not come to the rescue, truth, sense and honour bit the dust, or, in the case of this wetland, drowned in a sea of despond. “We treat you with the contempt you deserve.”