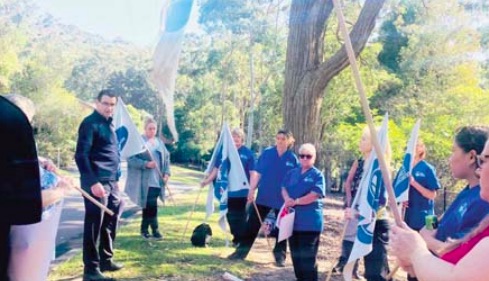 Allity aged care nurses met on their own time outside the Henry Kendall Aged Care facility in Wyoming, on Friday, August 3, demanding that Allity end its 18 month delay on a new enterprise agreement.

Allity nurses met to urge the company to address serious understaffing issues and offer a fair wage increase, which they said should be back paid to October, 2017, when a pay increase was due. This comes after the country’s fifth largest aged care provider put forward two offers containing substandard pay increases, both of which were rejected in a vote from staff. The NSW Nurses’ and Midwives’ Association (NSWNMA) General Secretary, Brett Holmes, said Allity need to show their nurses the respect they deserve by ensuring safe staffing levels at their facilities and a fair wage increase.

“Understandably, our members are very disappointed that Allity rejected their request to negotiate a fair pay increase and replacement agreement. “Allity is currently one of the lowest paying aged care employers in NSW,” said Holmes. “The initial 1.8 per cent pay offer that Allity put forward in October, 2017, was less than the average cost of living increase, so it’s not surprising that nurses voted it down. “What is even more disheartening for our members is knowing that Allity reported a $20m profi t in 2016, up 37 per cent on the previous year,” Brett said. After initially refusing members’ requests to bargain, a direct offer of 1.8 per cent was made, followed by 2.35 per cent six months later. Both were voted down by staff. Allity aged care nurses are asking for improved staffing to ensure there is a safe number of nurses and carers on each shift, as well as a pay increase of 3 per cent per year. This would bring their wages closer to levels at other aged care facilities.