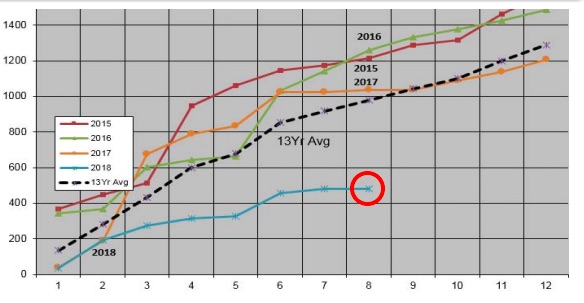 Rainfall data as collected by Jim Morison of Umina.

The Peninsula has recorded only 0.5mm of rain in the first 10 days of August, according to rainfall data compiled by Umina’s Mr Jim Morrison.

On average the Peninsula normally record 61mm of rainfall in August and as we approach the halfway mark for the month that figure seems unlikely to be achieved. The abysmal rainfall brings the Peninsula’s total rainfall record as of August 10, 2018, to 478.9mm, well below 2017’s record of the same time of 1033.9mm.

According to Central Coast Council Mayor, Clr Jane Smith, the Central Coast dam levels were sitting at around 60 per cent as of August 10, meaning water restrictions may not be needed on the Coast at this point in time. Time will tell.