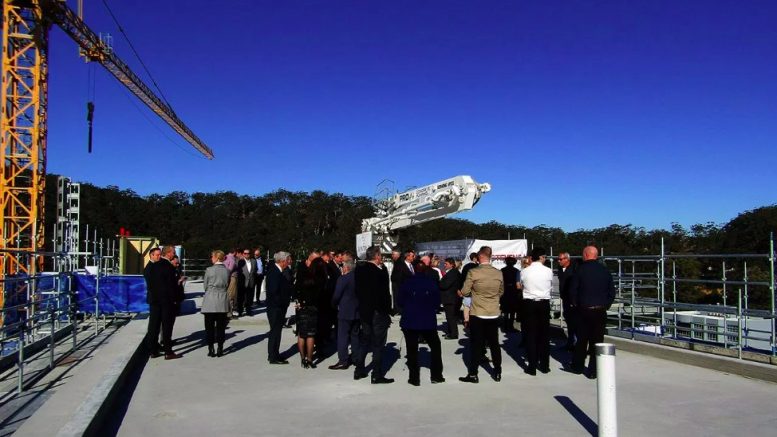 Central Coast Newspapers has been given a sneak peek inside Bonython Tower, the luxury development heralded as one of the most prolific catalyst projects for the Gosford CBD.

Bonython Property and Investments (BPI) is the development arm of the John Singleton Group, led by enigmatic advertising mogul, John Singleton.
Singleton is famously known for “being sick and tired of waiting for the Central Coast to take off,” and has had his finger in the pie of some of the region’s most notable luxe attractions, including Bells at Killcare, Pretty Beach House and most recently, Saddles at Mount White.
Through BPI, Singleton has focused on building a reputation for creating luxury developments, lasting partnerships and local enrichment on the Coast, and Bonython Tower is no exception.
The $35m development stands 13 storeys tall and will contain a ground floor dining precinct, two levels of commercial office space, a private car park with a double car hoist, and 56 units.
The project is currently Gosford’s tallest structure, and also sets a new record for the suburb, with one its penthouses selling for $1.6m in June.
Executive Chairman for BPI, Paul Anderson, was on site on Wednesday, August 29, to celebrate the tower’s topping out.

“Today is a real milestone for BPI,” Anderson said.

According to Anderson, the project has been running ahead of schedule, with the development fit out sitting at around 90 per cent.
With scaffolding expected to be coming down as early as January, 2019, the focus is now on the internal fit out including waterproofing, flooring and structural fittings, and with only eight of the 56 units left unsold, Coast Community News asked Anderson the question, who’s moving to Gosford?
“We’ve had a real mix of interest since units became available.
“We’ve got Sydney siders looking to relocate, first home buyers, empty nesters and commuters who love the idea of being a stone’s throw away from Gosford’s transport hub,” Anderson said.
According to Anderson, BPI was also well into negotiations with several parties interested in leasing the commercial levels, which offer luxury office/commercial space in the CBD.
The tower’s dining precinct has also been purchased.
“I can’t give too much away, but the ground floor precinct will feature a café, bar and a luxe restaurant, the likes of which isn’t currently available in Gosford,” Anderson said.

Activating Gosford through the tower has been a major focus for BPI, and Anderson said the benefits to the wider Gosford community were already palpable.
“Every part of this project has had an emphasis on giving something back to Gosford,” Anderson said.
“BPI has done its best to keep things local, and we’ve employed over 100 tradies, suppliers and architects over the duration of the build,” he said.
Anderson also gave a nod to the flow-on effects of this employment and believes surrounding businesses have benefitted immensely from their patronage.
“All in all, we’re incredibly proud of what is shaping up to be one of the most ambitious ventures in Gosford’s history.
“There is nothing like this on the Central Coast right now and there won’t be for the next two to three years, as other developments take shape, so the Bonython really is poised to reap the rewards of Gosford’s CBD revitalisation,” Anderson said.