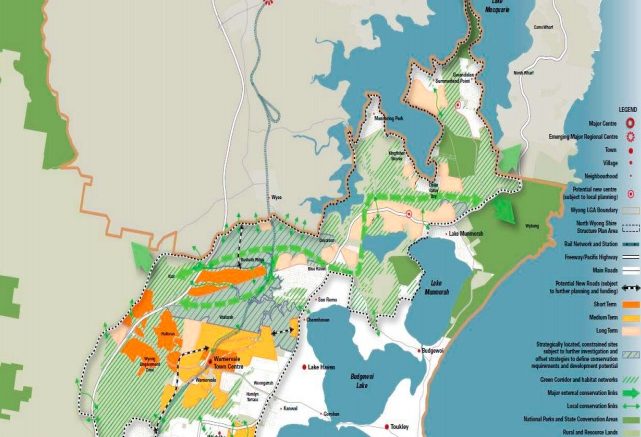 Council staff have recommended that Councillors vote in favour of the request when they meet on Monday, August 27. According to Lee Shearer, “Ultimately, this work is aiming to deliver both the environmental and development outcomes identified in the Central Coast Regional Plan 2036, at least cost to State and local government and the private sector”. According to a staff report, the project “is part of the NSW Government’s commitment to ensuring housing and employment growth supports the State’s economic prosperity and achieves environmental sustainability.”

It is being undertaken under the Biodiversity Conservation Act 2016. “The project will apply to important strategic growth centres identified in the Central Coast Regional Plan.” In the former Wyong Local Government Area, the focus will be on the North Wyong Shire Structure Plan lands and Darkinjung Local Aboriginal Land Council lands. Council or private landholders may still apply for Biodiversity Certification of other areas.

“Biodiversity Certification is a mechanism that integrates planning for biodiversity conservation with planning for proposed intensification of land use to support housing or employment. “For example, conversion of rural or environmental land to urban or employment purposes,” the staff report said. “Biodiversity impacts of future development are assessed at a landscape scale and offset early in the planning process.

Those options include the creation of State Conservation Areas and National Parks, local Development Control Plans (DCPs), the adoption of State Infrastructure Contributions (SIC) that allow biodiversity land to be purchased or enhanced, and any other measure determined by the NSW Minister for the Environment. Biodiversity Certification operates within an impact assessment where development must avoid areas of high biodiversity value, such as those containing Ecologically Endangered Communities (EECs). “Such areas should be established as Biodiversity Stewardship sites, or under some other conservation measure,” the staff report said. The NSW Government’s Biodiversity Assessment Method uses a calculator to determine the number and type of credits required before a developer can clear land.

“The main advantage of the project is that credits are more likely to be located and established within the local region, which may not occur under a standard … approach,” the report said. “Significant areas of high conservation value vegetation occur in private ownership, or as vacant Crown Land in the Central Coast Local Government Area, such as over 1,500 ha of proposed COSS land [the Coastal Open Spaces System of the former Gosford Council] and large tracts of bushland in the Charmhaven and Doyalson areas.

“The Department of Planning and Environment (DPE) has shown a preference in attempting to establish Biodiversity Stewardship sites over these areas, rather than outside of the Central Coast Region. “This process may assist in the expansion of the COSS lands, or a similar scheme, into the former Wyong LGA.” Other advantages of Council participating in the project were listed as certainty to applicants that they can get consent for developments in “highly constrained locations. “A number of sites may contain species where obtaining credits may be particularly difficult, or not allowed, under the standard development assessment pathway. “The DPE will fund technical studies, this saves applicants up to $50,000 per site,” the report said.

The Central Coast Regional Plan 2036 has a goal of protecting the natural environment through the protection and management of environmental values. Direction 12: Protect and manage environmental value, and more specifically Action 12.3, focuses on identifying and strengthening biodiversity corridors as places for priority biodiversity offsets. “The areas considered for Biodiversity Certification are those identified as the major growth areas within the Central Coast Regional Plan 2036, and Biodiversity Certification will streamline development assessment in terms of biodiversity impacts in those areas,” the staff report said.

Council waits for details while Woy Woy channel silts up

Council resolves to call for an urgent halt to seismic blasting