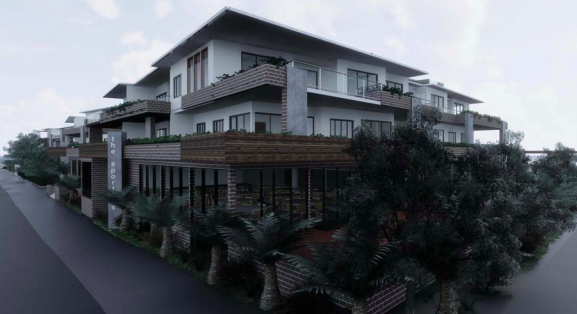 Central Coast Council planning assessment staff have recommended the refusal of the $30.3 million redevelopments of the Sporties site on the corner of Brick Wharf Rd and North Burge Rd, Woy Woy.

The recommendation, which councillors cannot alter, will be presented to the Central Coast Joint Regional Planning Panel, which will meet to determine the application on August 23. However, councillors have asked to see the assessment report and are expected to discuss it when Council meets today (August 13) to decide whether to make their own submission. The Save Woy Woy Waterfront, the community group that has led opposition to the development is expected to speak at the meeting.

The group has also made submissions to the Joint Regional Planning Panel and is also expected to address the panel. According to the assessment report prepared by Council staff, 94 submissions were received regarding the proposal to demolish the existing clubhouse and replace it with 63 seniors independent living units, a new registered club, five retail tenancies and a basement bowling green and car park across three buildings. The assessment report gave a number of grounds for recommending refusal of the proposal includings its failure to address flood risk, noncompliance with planning controls and insufficient information being provided “for further assessment”.

The assessment report listed the application’s noncompliance with sections of the State Environmental Planning Policy (Housing for Seniors or People with a Disability) 2004, the Apartment Design Guide, Gosford Local Environmental Plan 2014 and Gosford Development Control Plan 2013. Non-compliances included a 56 per cent variation to the maximum height of eight metres or less, a proposal for three storeys when a building adjacent to a boundary of the site must be no more than two storeys and a shortfall in the requirements for communal open space. The proposed development also had a shortfall of 188 car parking spaces, according to the Council report. The report addressed the concerns raised during the public exhibition of the proposal, one of which was that the redevelopment would be out of keeping with the intended recreational use of the land.

“Whilst the provision of a registered club and community facilities are permissible with development consent in the RE2 Private Recreation zone within GLEP 2014, seniors housing and retail facilities are prohibited,” the report said. “The proposed development comprising seniors housing on No 186 Brick Wharf Rd and No 1 North Burge Road, Woy Woy, is permissible by virtue of the provisions of the …[State planning policy]…which provides the policy applies to land being used for the purposes of an existing registered club. “The applicant was advised of the prohibition on the site relating to the five retail premises proposed, however, to date this issue remains unresolved,” it said. According to the report, seniors housing is permissible at 184 Brick Wharf Rd which is zoned R2 Low Density Residential. The Council report does, however, state that the proposal could not be supported because “Insufficient information has been provided to enable further assessment to occur”. The report also strongly rejects the proposal on the bases of the “flood constraints of the site.

“The site is considered unsuitable for seniors living housing,” it said. It also questioned the NSW Department of Planning’s decision to issue a site compatibility certificate under the Housing for Seniors or People with a Disability SEPP which stated that the policy applied to land being used for the purposes of an existing registered club. “Council considers that the director-general has not certified that the site is suitable for a more intensive development.

“It is concluded that the proposed development is of a larger scale than the development considered by the department … in issuing the Site Compatibility Certificate consequently removing the consent authority’s ability to approve the development application. “The proposed development is not compatible with the surrounding environment in that the applicant has been unable to adequately demonstrate how residents within the development can be safely evacuated during extreme weather events and projected changes as a result of climate change.” The proposal was not supported by Council’s Traffic and Transport Planner for a range of reasons. Council’s Landscape and Recreational Planner reported that the proposal would “negatively impact community use” of an adjacent public car park and on street parking in North Burge Rd. Another finding was that light pollution from the development could “adversely impact upon the amenity of neighbouring residents”.